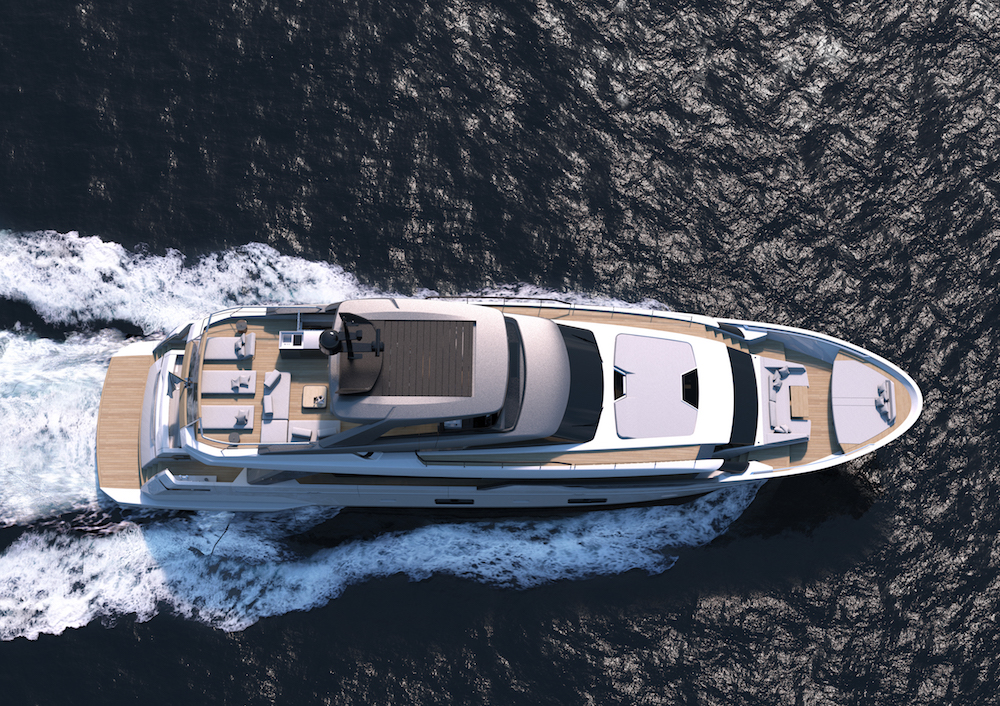 Sanlorenzo SL102: the first asymmetrical motoryacht in the world

Asymmetrical like nature, like the human body, like a house. For an advanced approach to livable spaces, use and enjoyment of the sea on board of a motoryacht that goes a step further than others. 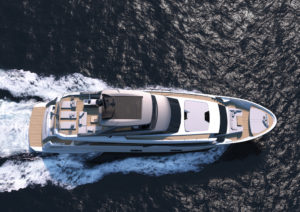 Sanlorenzo returns to the international scene with a bold and innovative project.

The idea of creating an asymmetrical yacht stems from a well-defined design idea that is rooted in the company’s DNA and in its intrinsic capacity to redesign the interior of a boat, pushing its horizons further and further, while expanding the boundaries of nautical design each time.

With the aim of obtaininggreater usability of the interior spaces and better access to the exterior, the SL102 rethinks the well-established layoutof a yacht, only keeping the deck on the starboard sideand eliminating the port side one, which is carried on the roof of the structure,allowing through this asymmetrical configuration, never tried before, to recover about 10 square meters of area to benefit the interior.

Thanks to the desire to think differently, to dare to step outside of traditional customs, the company thus again has proven its aptitude for working on the concept of space, molding it at will every time, to give life to ideas pieced together by customers’ wishes. 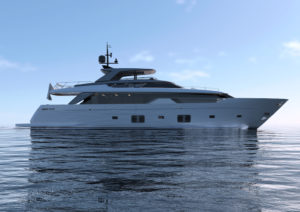 At first glance, there is not doubt that this is a Sanlorenzo. The sober lines, the balance of the masses, the measured hull openings, the inclined and aligned powers, the streamlined and non-imposing superstructure. All the styles and characteristics of a house family feeling are present and harmoniously applied to the new SL102. 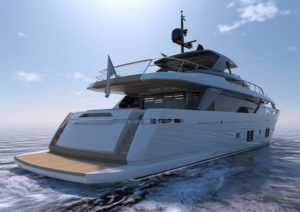 It is necessary to go around the SL102 to realize the latter. And not just once. A few turns around it must be made. Looking at the port side, starboard side and then carefully looking at the bow: the SL102 is not the same from one side to the other! Sanlorenzo once again dares to offer something never seen before, never thought of, and never created in yachting: a boat with different sides.

Massimo Perotti, owner, but above all the energetic engine of Sanlorenzo, threw his heart into uncharted territory and rode the wave of this further challenge to traditional conventions, to propose new ideas that maximize living spaces, quality of life on board, and the relationship with the sea, the quintessential reason to own and use a boat. 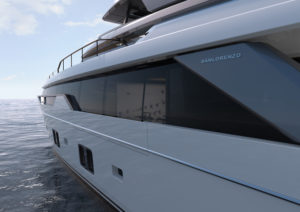 If the starboard side has a deck that leads seamlessly from the aft cockpit to the bow living area, along which the bulwark at the living room level opens to form a terrace, (an idea that Sanlorenzo first applied to the 40Alloy superyacht  in the now distant 2008), the port side, on the other hand, looks like a wide bodyhull, thus a yacht much larger than the 31.10 meters of the SL102: the side is in fact continuous from the waterline to the flying bridge because the deck, constructed on the roof of the superstructure, an idea already applied once again to the 40Alloy, flanks the flying bridge at the same level, to then descend into the living room by a staircase of six steps. Also on the port side, at the level of the dining area, part of the side wall can be lowered with external hinges and electric movement, expanding the panoramic view outside.

The asymmetry has in fact allowed for placing a large dining room with full-height window that overlooks the sea on one side, while on the other, to starboard, a living room that opens on a balcony. Similar to a modern villa on the sea. A creative idea that compared to a traditional layout, allows for more space, brightness, relaxation, and better flexibility of use. 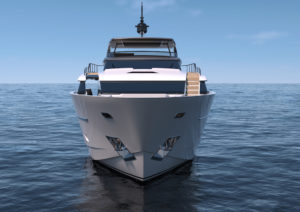 The gestation of the idea has been a composite, with multiple brains, minds and creativity combined to achieve the result. From an original idea by Chris Bangle, the brilliant car designer who has recently collaborated with the shipyard, the technicians and interior designers of the shipyard, to Bernardo Zuccon, the young architect, following in the artistic steps of his family, who with his sister Martina is dispensing ideas and professionalism to the sector while continuing the Zuccon International Project.

“The reason for the asymmetry is fascinating, states Bernardo Zuccon, it is a real challenge and a typological experimentation. As an architect trained in residential design, I consider every type of housing a different way of living in a home. In our case, asymmetry is an interpretative key to a typological identification process. The real challenge was not to change the history and tradition of Sanlorenzo by making a mark, but to respect the strong image of the brand and its yachts, innovating without losing its identity.

In reference to naval tradition, we tried to forget traditional lines…to shift the balance. The luck of the naval designer has always been to draw half a boat and then mirror it. This project changes the consolidated flows and concepts. With this boat the design path is more enterprising and the times have been longer.

The other great challenge was to hide the asymmetry. If we had revealed it, that is, made it visible and obvious, we would have gone against the perfect balance of Sanlorenzo’s family feeling. To achieve it, it took the courage that only Massimo Perotti could express“. 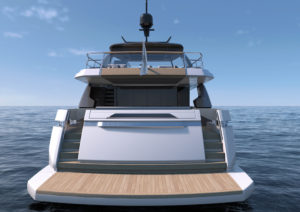 The SL102 disguises its asymmetry in the skillful design of the walls, which bear the same lines on both sides, and in the highly skilled masking game of the upper port side deck protected by a handrail that is also on the starboard side, more as a decorative than protective element, however useful for the containment of the sunbathing area obtained on the roof of the superstructure at the bow of the covered wheelhouse, a design commonly defined by Americans as a Raised Pilot House. 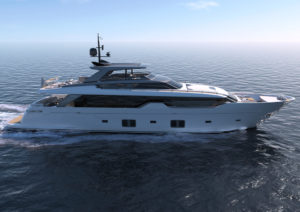 The two passage areas to the bow, the one on the upper port side and the one on the lower starboard, were symmetrically adjusted, within the asymmetry, with the light-dark visual play of the windows of the bow and the roof of the superstructure, in a sort of “trompe-l’oeil” which requires the viewer’s careful eye to decipher volumes, passage areas, and movements.

“It is necessary to reflect on this point, Bernardo Zuccon points out. It is not enough to see it, we need to look at it to interpret it. We are not upsetting the system, but rather moving the axis of symmetry differently. The sea is the protagonist of our work, which is what allows us to create different life scenarios. Being able to combine them becomes the successful result of our work“. 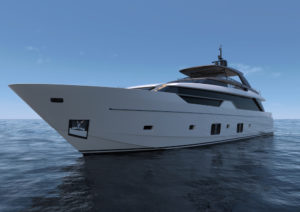 Sanlorenzo also offers various asymmetric layout solutions for the SL102. The European one proposes the owner’s suite at the bow of the main deck with a choice of a potential collapsible balcony and the living room with different seating configurations. In all cases, the guest cabins on the lower deck are four symmetrical double rooms. On the other hand, the American layout uses the forward area of the main deck for alargecountry-kitchen which is connected the dining room located at the border towards the stern. In the hall, near the door to the cockpit, there is a bar counter. The owner’s suite descends to the center of the lower deck and there are three guest cabins, a double VIP and two doubles with single beds.
The decor and furnishings are also taken care of by the Zuccon International Project studio, through the sophisticated choices of Martina Zuccon. Like all Sanlorenzo vessels, the SL102 is also built according to the tastes and needs of each owner, in accordance with the “made to measure” motto of the house, which the shipyard can satisfy in a tailor-made manner. 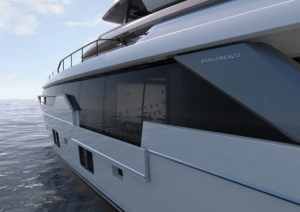 Sanlorenzo also offers more options in engines, always signed by MTU, allowing the owner to choose according to the yacht’s prospective use: