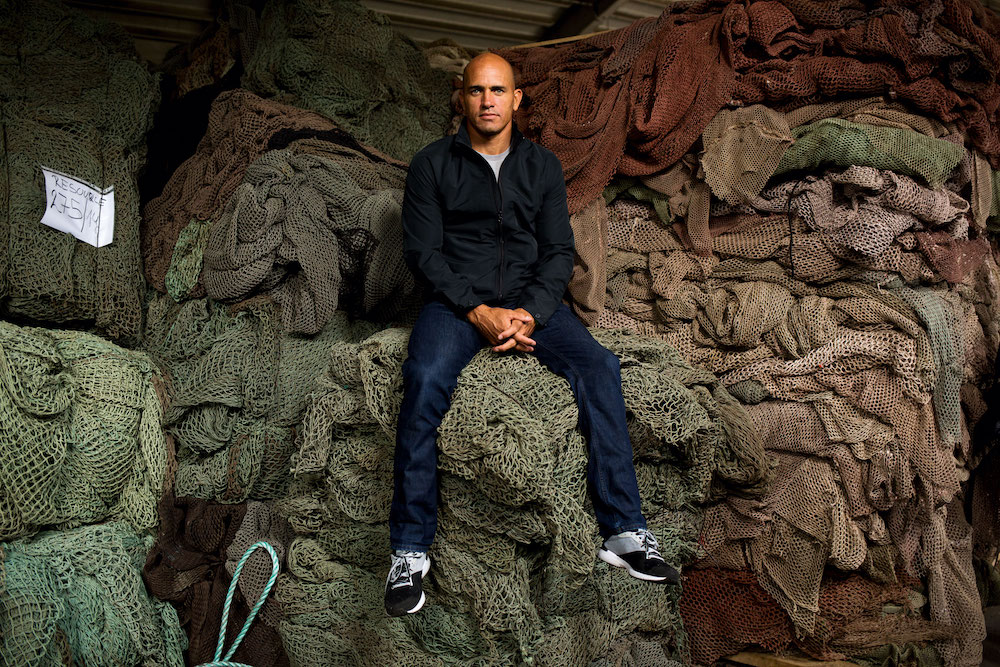 Records are there to be broken, particularly in sport. Surfing is a bit of an exception to that rule, however. It is hard to imagine anyone equalling let alone beating the long list of records set by Kelly Slater.

He remains the only practising athlete in his discipline to be both the youngest (20) and oldest (39) to have won a world title of which, by the way, he has 11 in all. The 47-year-old is the second of three children and began surfing in her hometown of Cocoa Beach on Florida’s Space Coast which is as famous for the NASA launch base at Cape Canaveral as its waves.

These days, Kelly Slater is joining forces with two talented women, Stephanie Gilmore and Sally Fitzgibbons, in the Breitling Surfer Squad. The trio is working hard to raise awareness of the issues damaging our seas and oceans and what can be done to protect them. This is very much a desperate race against time in which both Breitling and Kelly Slater are at the front line. We met Slater at his Surf Ranch at Leemore, California, where he trains in a huge pool with an equally massive artificial wave-maker.

The occasion was the launch of the Superocean Automatic 44 Outerknown, a timepiece that copper-fastens the partnership between Breitling and Outerknown, the sustainable clothing company Slater co-founded. The new watch even features a NATO strap made from ECONYL® which is made entirely from recycled waste nylon.

What prompted you to join Breitling?

Well, number one: I love the company. I was really honoured when they approached me and wanted to work together. Also, the idea that they had about their different squads, and the idea to go for the best in each walk of life and to be on the team with Stef (Stefanie Gilmore –ed.’s note) and Sally (Fitzgibbons – ed.’s note), I thought,  was great. I have a lot of respect for both of them. They both work very hard and are amazing at what they do. And I thought it was nice to have a little three-person team like that.

Well, I’ve been a perfectionist my whole life. I’m a middle child. I had an older brother who was kind of tough on me, and so I always wanted to be the best I could be, all the time.  So I was very sensitive to improving every aspect of my life.

What is your own relationship with time?

The irony is I’m late to everything! (laughing) I’m always late for plane flights! But for what I do in surfing you have to be very specific with your time. Like, once the time runs out, you’re done, you have no more chance And, funnily enough, throughout my career, I’ve finished so many things in the last minute, done really well right at the end. It’s almost like the pressure builds and I sort of get better and then I’m able to perform at my best.

You were both the youngest (at 20) and the oldest person (at 39) to win the world championship. Do you feel young or old right now?

I probably don’t feel my age. I feel much younger, but when you see what the levels are doing with the surfers, you start to think, “OK, I either have to join in and learn some new things, or I’m going to start feeling old”.

How did you get into surfing?

I grew up in Cocoa Beach, Florida. My dad liked to surf, my mom liked to be on the beach, and my older brother started to surf and it just became natural. But I think if I was born later, I don’t know whether I’d have been a surfer because once there was like a beach club kind of thing, and my parents liked to hang there, and then their friends all hung out there, and that doesn’t exist anymore. Pretty much all the beach front areas are condominiums. Indeed, I wish somehow could have bought the little restaurant that was there and kept it going.  The only consolation is that the city renamed the street I grew up surfing on in my honour. It’s now called “Kelly Slater Way.”

What was the worst moment in your career?

The worst one was probably in 2003, when I had my hands on the world title trophy. I hadn’t won in five years. I had taken three years off and then it was the second year back on the tour. I had a really good year, but I had some personal problems happening, and I let that really side-track the end of my year. So, in the final heat of the final contest of the year, I lost the world title. And that was a tough day for me because I was so close, but it made the next one better.

Probably in 1995. I was well behind in the last event of the year, behind two of my best friends, and it came down to just the three of us trying to fight for the world title, and on the final day I won the contest. I also won the Triple Crown in Hawaii. I won the Pipe Masters, I won the world title. It was as if somebody had written a script for me. In terms of my career, that was probably the best day of my life.

Is surfing more than just a sport?

For some people, it truly is an art, it feels like they’re expressing every bit of their soul when they surf. And I think that’s true for professional surfers too. It’s not just a sport for any of us: it is our lives. Like everyone I know who was a pro surfer before, and now they’ve quit their career, they’re still a surfer. I have friends who have surfed into their 90s.

In surfing movies like Big Wednesday and Point Break, everyone is waiting for the perfect wave. Is that just the way it is in movies, or is it also true in real life?

Well, we travel to find that. That’s definitely a reality for us, but it’s overly dramatic and sensationalized in a movie. But all of us still think, “I’m going to get the best wave of my life at some point in the future. It’s coming! That’s why we travel to Indonesia or to the Philippines or Japan or Portugal.

Travelling brings with it a cost to the environment. I know you were struck by the level of plastic pollution in places like Micronesia…  Man, it’s crazy! It’s crazy to see the most remote place in the world totally packed with pollution, plastics, rubbish. I was just in Japan and the amount of pollution on those beaches is out of this world. It’s frightening. We can’t just pretend it is not happening and we all have our part to play.