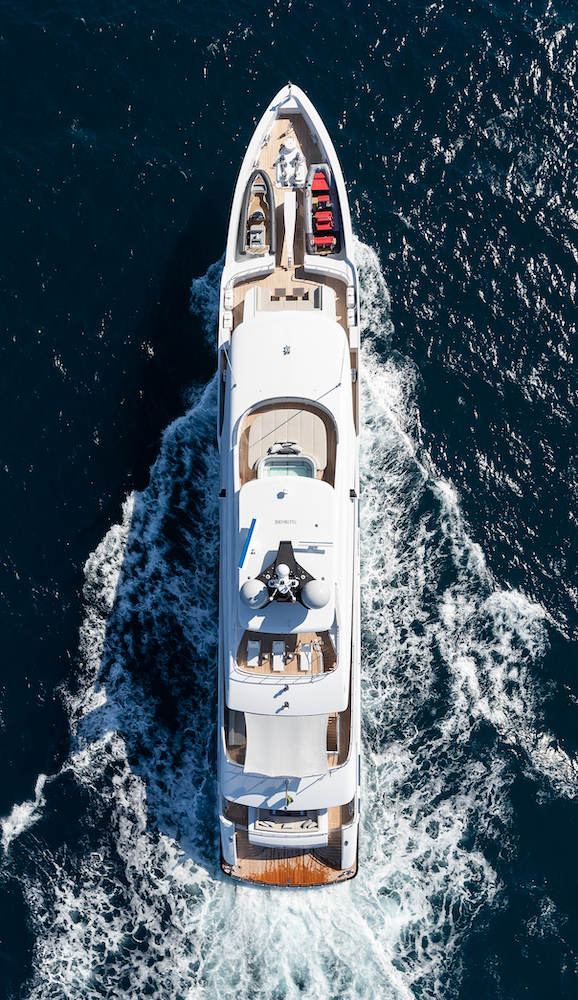 “Pura Vida” (“pure life”) is a Costa Rican expression meaning enjoying life to the full. The Florida-based owner is a frequent visitor to the country on account of his love of big game fishing, and shortened the phrase to “Vida” when choosing a name for a mothership.

The 55-metre steel motoryacht, which was previously known as Project Antares, was built by Heesen in the Netherlands. She was launched in 2019 and made her official debut at the last Fort Lauderdale International Boat Show. The owner had signed a letter of intent with Heesen when the hull was under construction (he had gone “on spec”) and the layout was already partially defined.

The brief was to provide a floating home where the owner and his wife, family and friends (there’s room for 12 guests in five spacious staterooms below deck, in addition to the 80-metre owner’s apartment forward on the main deck) could relax during fishing expeditions and tournaments.

This was because the fishing boats themselves were a little cramped. Not only that, it was essential that Vida had tanks that were large enough to enable her to act as a “filling station” for his other fishing boats.

It was therefore necessary to make changes to the layout that had already been defined. Yet the interior design of the new boat wasn’t all plain sailing and the owner wasn’t happy.

He decided to call in his fellow Florida resident, Elmar Benavente, who runs BE Design Associates in Boca Raton. They had already worked together on house interiors, but Vida was to be Elmar’s first yacht project.

Elmar didn’t start from scratch, however, on Vida and had to adapt to what had already been done.

His main contribution was “choosing the colours and materials. I wanted to create warm, earthy interiors, with a sense of harmony, but also using the colours of the ocean, such as blue for the cushions and pillows. I was trying to create ‘liveable luxury’”.

For wood, he went in for oak: “We used different types throughout the yacht. We were looking for a sepia feel. That made it easier to use the blue colours of the ocean, but also those of sand and driftwood”. Heesen proved to be perfect partners: “I discovered that the Dutch really respect craftsmanship and materials, especially woodwork, something that has been lost in the USA.”

He also made the furniture more comfortable, especially for the owner, “who’s tall!” Other new elements that Elmar introduced included white onyx. It features in the backlit arch in the aft entrance to the main saloon.

The arch also serves as a wine “cellar” or cabinet: “Basically, the owner wanted to make a statement. Guests immediately know they’re boarding an amazing yacht and that they’re welcome”.

Onyx likewise appears in the staircase and the bathrooms. Even though the lay-out had been established by the time Elmar came “on board”, he did take several changes. For example: “I didn’t want the TV to block the view in the lounge and so I moved it to the panels on the wall”.

The yacht’s large windows were already a feature, although Elmar was more than happy to work with them: “In a house views are everything: it’s what people pay for in the real estate business!”

When it came to the exterior areas,“I basically took the colours of the interiors outside. One thing I don’t like about yachts is that they often have what I call the ‘RV look’, with colours like red and black and we wanted to soften that”.

And, last not least, he also designed the ship’s logo. And so, after this experience, does he plan to work on other yachts in the future? “Oh, man, yes, of course!”