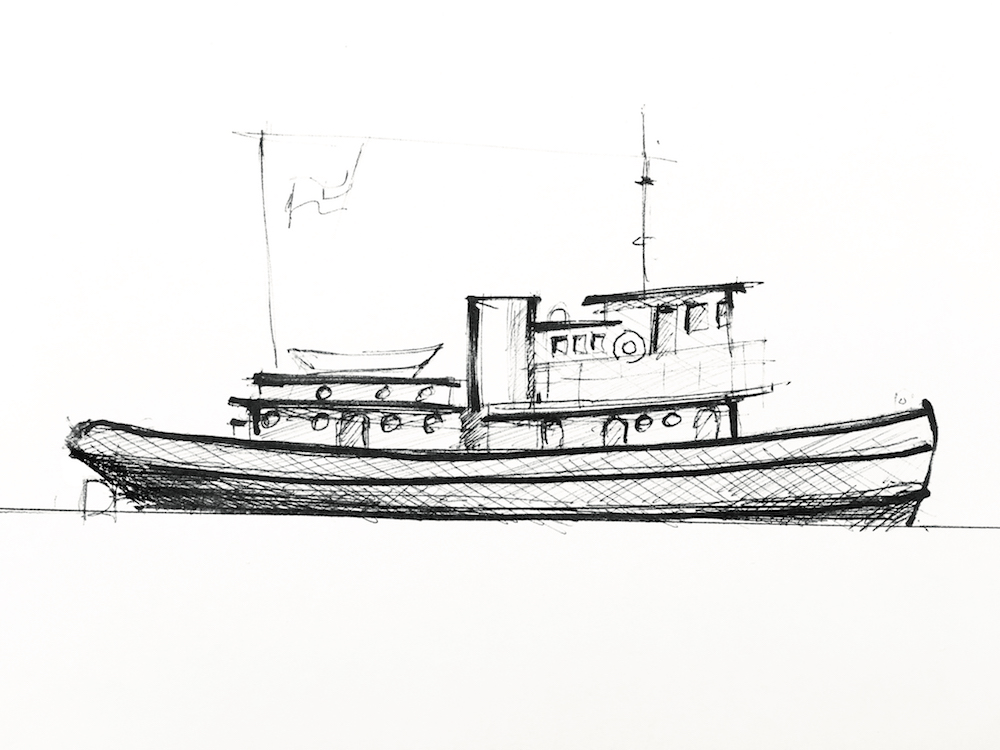 Ursus, the refit by Matteo Picchio

Having started life as Chipola, the tugboat now known as Ursus later become known as YTM 466, A.J. Harper, Martom and Wildflower in the course of a long and honourable career.

And now at last she is being converted to a luxury ship. “Yes, a ship that can be lived aboard for long periods of time not just in warm areas but also in arctic waters.

She’ll be safe in any sea, comfortable and all the choices made will be top of the range both in terms of technical prowess, elegance and sophistication,” says architect Matteo Picchio. Our story begins 78 years ago in 1940, in a shipyard in Louisiana, USA, with the building of Chipola, a then-leading-edge 24-metre steel tug with a beam of six that also packed a massive 560 hp 8-cylinder diesel engine.

During World War II, she was requisitioned by the US Navy as Tug YTM 466 and patrolled the minefields along the nation’s Atlantic coast. Once peace was restored, she changed hands and name several more times, working as a tug for barges and other vessels in and around Baltimore, Maryland. Several attempts were also made to convert her to a yacht. Ursus even spent a year stuck in the mud of that city’s port before going to New York. Finally, in 2007, the tug was bought on EBay and moved to Saint Clair Lake, outside Detroit, Michigan, a journey of 900 miles.

She was discovered there by her present owner in 2009, still afloat but in a pretty rundown state, being used as part of a bed and breakfast. He purchased the doughty old tug and with four friends and over 16 days, sailed her all the way back to New York, through lakes and canals in a race against the oncoming winter.

In May 2010, the ex-Chipola was loaded onto a cargo ship bound for Genoa. The owner contacted Matteo Picchio to show him what he’d bought. “He knew I had just done the design and project management on the conversion of the tug boat Tenace II to a yacht called Maria Teresa,” reminisces Picchio. “He told me he would probably give my studio the job of designing the interiors but also said that he wanted to get the hull right himself first.” Ursus was essentially rebuilt by Cantiere Amico & Co. of Genoa.

A few years passed and then, at the end of May 2017, Matteo Picchio’s phone rang. It was the same owner who had brought the tug to the Cantiere Navalmeccanica at San Benedetto del Tronto on the Adriatic. He now wanted Picchio and his studio to do the whole refit and conversion project. “Right away, we had a great rapport with the owner,” continues Picchio. “He’s a very technically competent person and also has a great deal of ocean sailing experience. But he wasn’t clear in his mind about the interior layout or the overall styling of his future yacht. The basic concept was that Ursus, as Chipola was to be known, should look neither faux antique nor pander to current trends.

We were to be respectful of her history and create simple spaces in her interior with no superfluous decorative flourishes. Just clean forms, nicely balanced with fine materials and finishes.”  Work on Ursus is progressing nicely with a deadline set for Christmas of this year. Her metal work has been renovated, retaining her original aesthetic and, in some instances, restored to its original look.

“The guardrails, stairs and skylights are stainless steel but they have been enamel-painted. In 1940, there would have been no polished steel aboard a tug!” explains Picchio.

Leading-edge paint was used in the interiors, however, which include two two-berth guest cabins and crew quarters on the lower deck, a saloon and a VIP stateroom on the main, and, lastly, the master cabin behind the wheelhouse on the bridge deck. Other flourishes include handstitched leather and suede, luxury woods, marble and stone in the bathrooms, and lots of white in the décor palette.

“The spaces will be timeless and outside of fashions,” continues Picchio. “With references to maritime tradition in general and the American furnishings and construction techniques of the 1940s in particular.   Warm, welcoming spaces that really beg to be lived in. But always with a strong focus on functionality. The goal is to achieve a kind of elegance suited to the very substantial, tactile and naval tugboat concept, by which I mean a ship that will really exude its core element of power and robustness. This has to be achieved without any forcing but by doing everything to a higher standard than the usual best practice.”