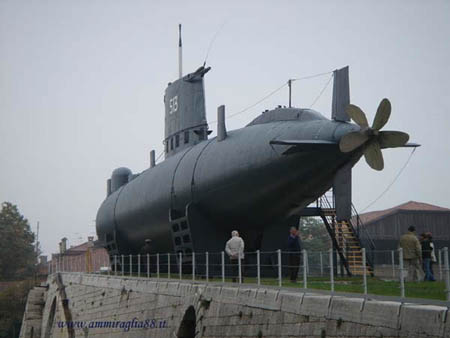 The best of ship and boat-building will be on show from June 18 to 23, 2019: motor yachts, traditional boats, sailboats, hybrid and electric boats, as well as a rich programme of conferences on the culture of the sea addressing current topics in the sector, from design to sustainability.

Discover the secrets and life aboard a submarine: thanks to the Fondazione Musei Civici of Venice, which has completed an articulate and complex recovery and enhancement program, the Enrico Dandolo submarine can be visited during the Venice Boat Show (June 18 – 23, 2019).

The submarine, which takes the same name as the historic military unit that fought in the Second World War was launched in Monfalcone in December 1967. Having been decommissioned in 1996, it was one of the first group of units to have been designed and built in Italy after the Second World War. The unit was designed to hunt and detect powerful submarines during the cold war. The 46-metre long, almost 5-metre wide submarine, equipped with torpedoes is currently housed in the Arsenale in the Navy area and is part of the heritage of the Naval History Museum, whose services to the public are managed by the Foundation together with Vela Spa.

Located on one of the two slipways and launching ports between Darsena Grande and Canale delle Galeazze since 2002, it has been restored and revamped to make it safe for access by the public. Furthermore, the intelligent and meticulous recovery of the space of a nearby air-raid shelter dating back to the Second World War has transformed this fascinating area into a real educational “museum”. In fact, it will be possible to stop and prepare for the visit of the submarine, thanks to a series of interesting contents that are proposed with an experiential approach: texts, splendid specially commissioned images and the possibility of practical and multi-sensorial experiments. During the show, guided tours inside the submarine are scheduled every day from 10:30 am to 6:30 pm. The tours will take place every 15 minutes in small groups of people, who will be given safety helmets to wear. People with poor mobility or those who suffer from claustrophobia or have difficulty moving in restricted spaces, for example, will be able to access the port ramp going up and take a look at the submarine from outside, as well as enjoy a visit to the didactic area in the recovered bunker.

For younger people and their families, this extraordinary experience during the Show also includes two new multidisciplinary recreational-educational workshops, developed by MUVE educational services, that are closely linked to the submarine theme, where every participant will have so much to do and understand and will have something special to take home.

With “The hidden eye adventure: let’s build a periscope!”,recommended for the 4 to 9 year-olds, children will make one of the most fun tools for anyone who has ever played hide and seek, with their own hands and, at the same time, they will get to know and understand some of the features and problems of the pioneers of underwater navigation.

The “Underwater secrets: a submarine just for us”workshop, on the other hand,is suggested for the 9 to 13-year-olds.  With this workshop activity, children will be able to build a small submarine, mainly using recycled materials, after having understood the basic physical principles of how it works, including the concepts of hydrostatic pressure and Archimedes theory of buoyancy through simple practical experiments. In both cases a tour of the vessel is included as well as a visit to the fascinating and mysterious educational area of the bunker, where there will be other surprises and experiments to experience.

The Venice Boat Show offers the best of Italian and international ship and boat building to satisfy every need with 50 yachts and super yachts ranging from between 15 and 50 metres in length. Don’t miss the brand new 50-metre Riva in steel, a gem of the made in Italy label, a flagship of the Ferretti Group that will also be displaying all its brands. The show, which is much-awaited by professionals and enthusiasts in the sector, will have hybrid and electric sailing boats on display as well as traditional lagoon boats and historical civil and military vessels.

To complete the event is a rich programme of conferences and meetings on the most current issues in the ship and boat-building sector, with themes ranging from design to sustainability, the environment and the culture of the sea.

All the events, opening times to the public and list of exhibitors are available online from: www.salonenautico.venezia.it