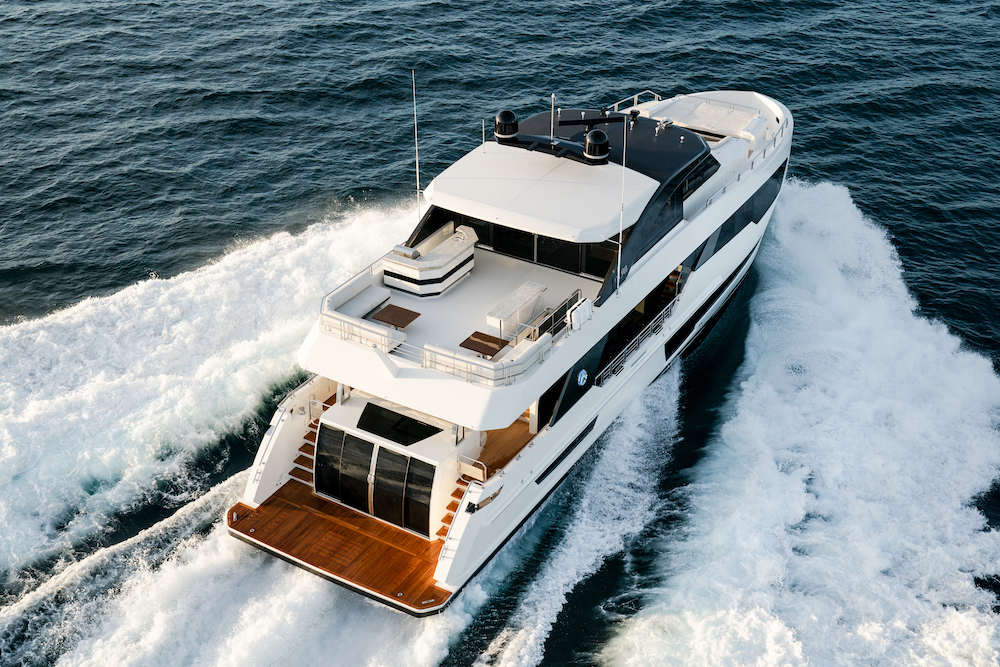 A very stylish European debut for a yard little known in this country but which has been one of the top 20 pleasure yacht builders for quite some time now.

Ocean Alexander is Taiwanese but also has construction bases in the US. For its maiden outing on this continent, it brought along the 90R from its Revolution series first to Cannes and then to Monaco.

In business since 1977 and famous for the quality of its yachts, Ocean Alexander has always found a natural outlet for its products on the Asian and US markets.

For its debut on this side of the  Pond, it chose the fifth example of a new series designed specifically for a European clients who are well known to be much more demanding on the design front. “The 90R combines Ocean Alexander’s meticulous focus on quality with the top names in the contemporary yacht design world,” says Giampaolo Murzi, Ocean Alexander’s distributor for Europe, Turkey and Russia.

The 90R’s interiors and exterior lines are the work of  Evan K. Marshall, while the naval engineering was entrusted to Arrabito Naval Architechts. With a duo like that on side, the result couldn’t but be surprising.

Although it still has the imposing lines and large volumes of all the other models, the 90R has much more contemporary exteriors, a plumb bow and noteworthy details of the likes of huge windows on the main deck and a beach club which converts to a water-skimming observation lounge or chill-out area shielded behind glass doors in bad weather.

“We tried to use as much glass as possible to bridge the gap between interiors and exteriors and literally bring the sea into the boat,” explains Marshall.  Floor-to-ceiling windows on the main deck forced the designers to do something revolutionary with the furnishings, however.

Gone are the classic storage units under the windows, replaced by freestanding pieces that make you feel more like you are in a penthouse than aboard a 27m yacht. In the saloon on the main deck, the tableware units have been turned into gorgeous floating islands, in fact.

Instead of being hidden away amidships, the dining area is showcased just in front of the large sliding door that connects galley and saloon.   Just like in a loft.  “To really accentuate that loft idea and the feeling of lightness, we used recessed bases on all the furnishings to make each individual piece more dynamic,” explains Marshall.

The master suite forward on the main deck also benefited very nicely from this new interior management style. An armchair that can rotate through 360°, has been placed in front of the big windows and can be used either for admiring the views in comfort or to relax looking inward.

As the master suite was moved to the main deck because of the larger volumes afforded by the plumb bow, the lower deck is now given over entirely to guest cabins which vary in number depending on the layout. Aside from the steering position, the upper deck also houses a saloon.

Large windows and a sliding doors put the latter in direct contact with the outside cockpit, turning it into an observatory lounge. Amongst the other new features aboard the 90R, Marshall is keen to point out the extreme care that went into choosing the materials. “To emphasise the brightness of the interiors, we opted for woods, particularly oak, with a strong grain.

The different tones and finishes ranging from matt to ultra high glass, and stainless steel accents that underscore the changing colour of the wood, create an overall sense of movement,” explains  Marshall. But that is far from the end of the tale. The traditional marble used on previous Ocean Alexander models has been replaced on the very appropriately named new Revolution series.

In its stead, Marshall has used Cambria Stone, which is far tougher, more durable and easier to maintain than marble or granite , and is less expensive too. It is also suitable for a much wider range of uses and is an easier fit with the interior design.

1 Responses to “The Ocean Alexander 90R”