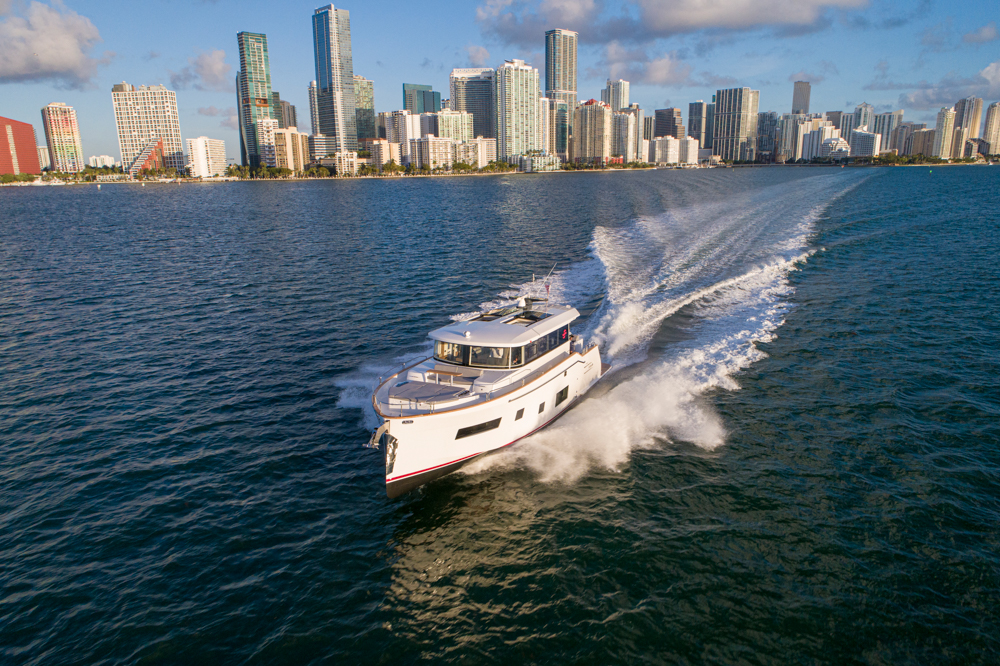 The Sirena 58 Coupé is the direct result of Sirena’s response to customers who have expressed a preference for an “express” style yacht.

Sirena’s existing 58 is already the most successful yacht in the builder’s portfolio, and according to Sirena’s Director of North American Sales, Constantinos Constantinou, “This yacht is for anyone looking for a sleeker exterior profile or for couples who prefer not to have a flybridge but do admire the build strength and design details in Sirena’s existing 58.”

The hull and superstructure design is credited to legendary naval architect, Germán Frers and features a contemporary plumb-bow design, modest freeboard, and a fast-displacement hull that provides for substantial vessel range (exceeding 850 miles) at lower speeds of 10 knots, while still capable of top speeds in excess of 26 knots.

The Coupé version augments the existing 58 lineup by providing a vessel with distinct characteristics, such as a lower air-draft, a unified interior space on the main deck, and a light and airy interior imagined by famed Italian interior designer, Tommaso Spadolini.

Constantinou is confident that the 58 Coupé will find a wide and receptive audience throughout the United States, thanks to this vessel’s unique combination of quality, style, size and performance.

“While we are confident in all of our layout options for customers,” he says, “we are particularly happy that this three-cabin arrangement will garner attention among North American buyers.”

With its unique forward owner’s stateroom, the bi-level suite is a showpiece in vessels of this size, offering owners access to the main pilothouse or a private entrance to the foredeck lounge. Interesting for owners who want to accommodate guest in owner-caliber accommodations, the 58 Coupé is also available in a twin-master lower deck layout.

Another important distinction is found on the main deck of the Coupé. Sirena aimed to unify the natural division between the aft deck and the salon and pilothouse bulkhead.

“Without a staircase to the bridge,” Constantinou says, “We were able to take advantage of the additional room by re-engineering salon entry doors in order to increase the on-board space. The 58 Coupé’s galley spans the entire beam of the aft bulkhead.”

The galley itself is upgraded by the extra square footage in the form of additional countertop prep space and additional under-cabinet refrigerator and freezer.

With a clever four-panel door that opens almost entirely, the space from the pilothouse through to the transom is open and at a single level. A shaded aft deck, by virtue of an overhang as well as an electrically-controlled sunshade, makes inside-out living the true benefit in this new design.

Says Constantinou: “We feel that for those customers who don’t need a flybridge, this coupe version of the 58 offers the best of both worlds: inside-out living and incredible flexibility, both in the accommodations spaces as well as the yacht’s overall performance.”