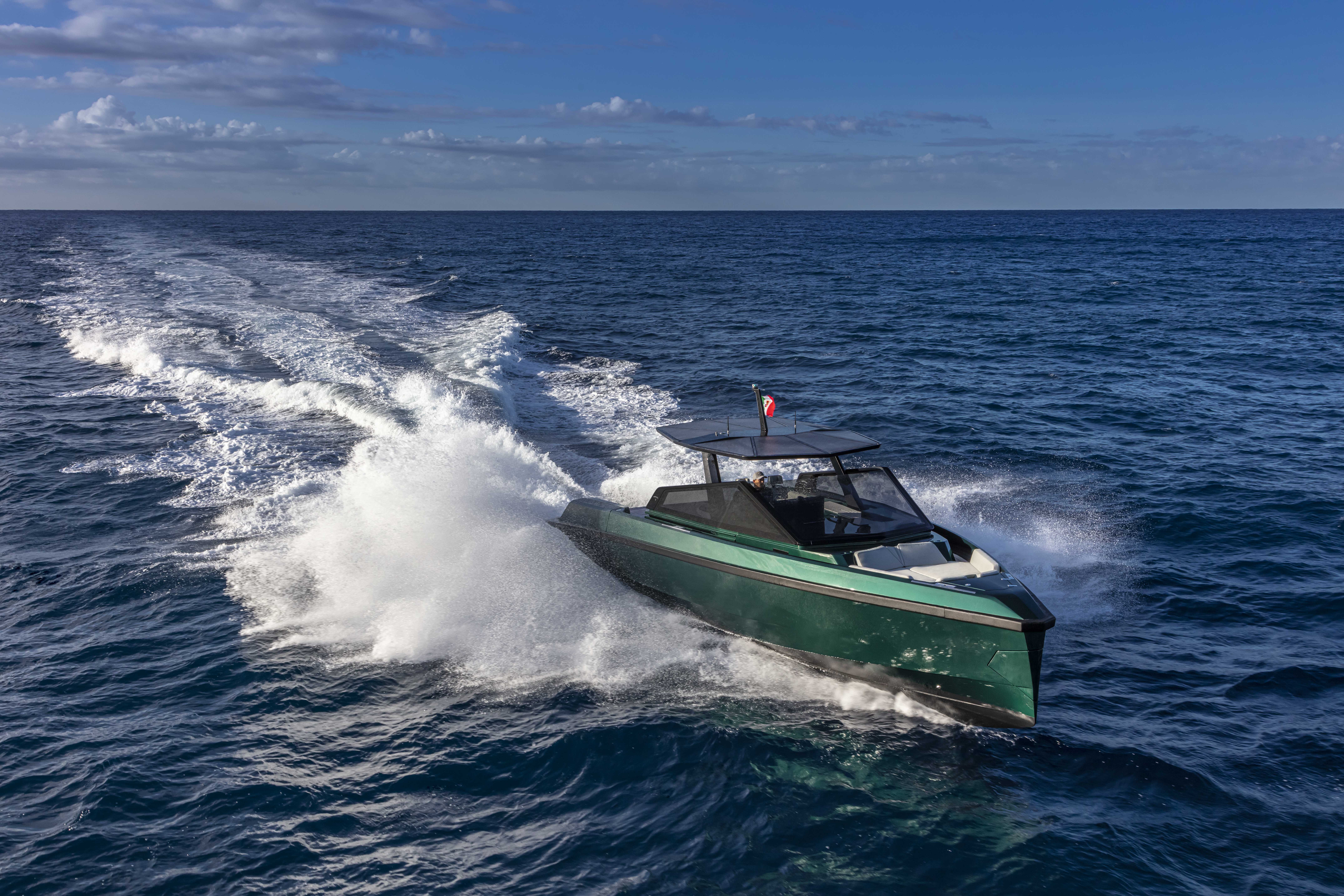 Despite the no worldwide presentation at the cancelled Cannes Boat show,  the new 43wallytender is gaining more and more attention as it’s a fast, fun and stylish luxury tender that introduced the world to Wally’s “center cockpit” design, which provides all the protection of a cockpit with the practicality and access of a walkaround.

This layout combines the enjoyment of being in the open air with the added security and comfort usually experienced on a more enclosed yacht. Drawing on the highlights of earlier Wallytender models, the 13-meter (42.6-foot) 43wallytender displays an abundance of design features that make it the ultimate multipurpose performer.

The result is a powerful, practical and seaworthy runabout that is designed to be pure, simple and magnificently seaworthy, suiting uses as diverse as family day boat, superyacht tender, resort shuttle and sailing yacht support vessel. It has the capacity to carry up to 12 people (Category B) at speeds of 40 knots.

«Our team has worked tirelessly to create a tender that perfectly meets the multifunctional needs of today’s owners while also staying true to our Wally design philosophy. You will not find a single item onboard that does not serve a purpose in its purest, simplest and most beautiful form. I am very proud of what we have achieved with the 43wallytender, which surely deserves its place cruising alongside our wider family of Wally yachts and tenders, » adds Luca Bassani, Chief Designer and Founder of the Monegasque brand.

When creating the model, Wally’s design team extensively consulted owners of its existing tender fleet to understand how the vessels’ various features have benefited day-to-day use.

The boat consequently fills a niche that strikes a chord with yacht owners the world over, delivering a sheltered passenger and driver experience, excellent handling, high-speed performance, generous bathroom facilities with standing headroom and separate shower compartment, a cabin with bed, and a range of deck configurations.

Staying true to Wally’s distinctive style and spirit, the 43wallytender simultaneously drives the company’s offering in a new direction while taking inspiration from the design heritage of its best loved models of the past two decades.

In particular, the similarities to early generations of Wally tenders including the Wallytender, WallyOne and 47wallypower are most evident.

The 43wallytender also draws on Wally’s sailing heritage through the laminated sail mounted across the T-top’s carbon fiber superstructure. This brand’s signature solves the problem of simultaneously delivering the sensation of open-air living and providing shelter from the sun.

Made from laminated sail cloth, the chic, contemporary “Wally” look of the T-top is highly practical, being light enough to be supported by a single pillar maximizing the visibility while reducing the displacement of the vessel, and semi-transparent to allow plenty of light shining on those in the shade underneath. Developed by Wally and Ferretti Group’s technical engineering department, the 43wallytender is constructed in advanced composites with carbon fiber at Wally’s new production site in Forlì, Italy. As with all the brand’s tenders, the 43wallytender is available in a range of head-turning colors that cannot be found elsewhere.

The first unit, which made its debut in September 2020 at the Ferretti Group Monaco Private Preview, has a striking iridescent green hull. The color has been dubbed “Gator Green”, in honor of the company’s first sailing yacht, Wallygator, which was also green; as the landmark yacht that initiated Wally’s illustrious history, 2021 will mark the 30th anniversary of her launch.

Today’s yacht owners are more demanding than ever before, expecting vessels to perform a range of tasks and uses, adapting from season to season or even more frequently. The ability of the 43wallytender to change deck configurations as its owner’s needs vary, is surely be one of its strongest appeals. The flush, open deck space behind the cockpit coupled with the standard wings provides the ideal platform to accommodate many guests or to transport sails for a racing superyacht during a busy regatta season. The addition of a fold-out dining table, seating and raised sunbed converts the tender into a perfect family day boat, resort shuttle or yacht tender

Further storage in an optional aft sunbed creates the ultimate platform for watersports activities, with space to stow Seabob, wakeboards, scuba diving tanks and other small watertoys. Instead of committing to a single configuration and purpose for the tender at the time of purchase, as is traditionally expected, owners of the 43wallytender have a full armory of accessories and features at their disposal, which can be stored when not in use and then swapped in at a shipyard between seasons in just a day or two.

As would be expected on a Wally yacht, the 43wallytender comes with a wide range of premium equipment as standard, including the carbon T-top, LED deck lighting, concealed hydraulic push-button anchor system, side-opening bulwark wings to extend the deck space (carried over from the 48wallytender), teak decking and the classic Wally wraparound fender system.

Twin Volvo Penta diesel 380hp stern drive engines are an advantage for storage on a lift at a waterside home and give the added benefit of a shallower draft for exploration in remote areas. There is an option to upgrade to twin 440hp engines for top speeds of 40 knots while the user-friendly joystick controls are ideal for intuitive and easy maneuvering.