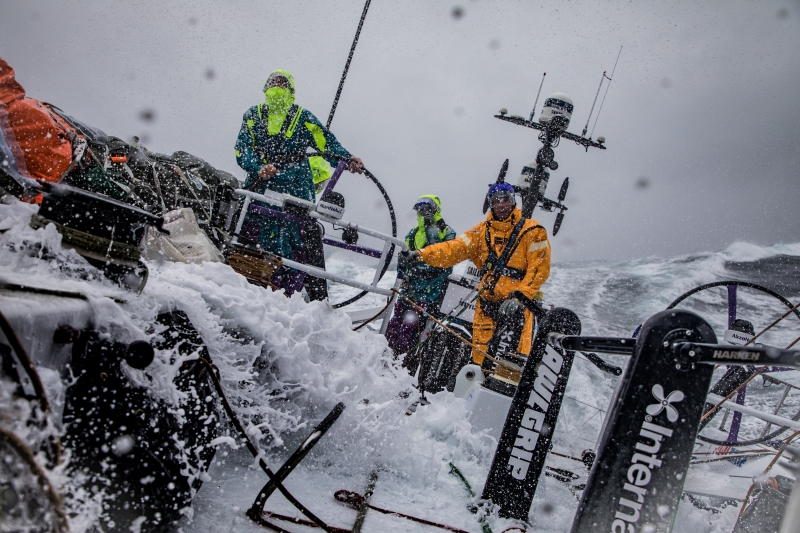 Team AkzoNobel continues to build on its record-breaking pace on Leg 9 of the Volvo Ocean Race, but a slowdown is forecast…

Team AkzoNobel set a new record for the greatest distance sailed in 24 hours in the history of the Volvo Ocean Race on Friday, eclipsing the previous mark and smashing past the 600-mile barrier as they rocketed through the North Atlantic.
Dutch skipper Simeon Tienpont’s crew bested the existing record for a yacht competing in the Volvo Ocean Race, the 596.6 miles set by Torben Grael’s Ericsson 4 in the 2008-09 edition. 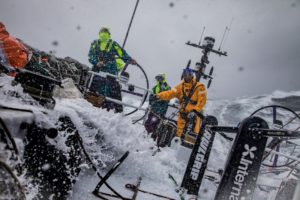 Leg 9, from Newport to Cardiff, day 5 on board Team AkzoNobel. The boat is flying along and making serious ground. 24 May, 2018.

As of 1300 UTC, the team was still adding to their record-breaking 24-hour run of 601.63 miles at an average speed of 25.08 knots.
AkzoNobel set the record on their cutting-edge Volvo Ocean 65 race boat as they blitzed east on Leg 9 of the Volvo Ocean Race from Newport, USA, to Cardiff in Wales. 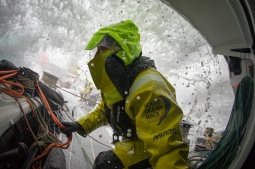 “It’s great to be the fastest boat in the race, and especially in these conditions where we can really go fast quite safely,” Tienpont said.
“Big thanks to the shore crew for preparing the boat so well so that we have the confidence to really put the hammer down. It’s really motivating for us to keep pushing hard, and to do well for the leg as well. We need to keep trucking.” 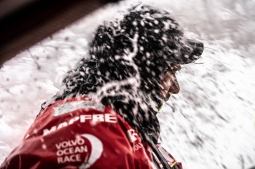 Two of Tienpont’s team had extra reason for celebration – Grael’s Olympic gold medallist daughter, Martine, is a key member of the AkzoNobel crew, while navigator Jules Salter was on board Ericsson 4 when the previous record was set.
“For sure Martine is excited – she can now call her father ‘Captain Slow’ at the dinner table’,” Tienpont quipped. “Also Jules has a nice grin on his face to break his own record.”

The record is based on distance run according the Race Management System which polls the boat position every minute. It will be checked against GPS data from the boat for confirmation.

AkzoNobel were not the only team putting the pedal to the metal – all seven crews have been enjoying speeds well into the 20s as they capitalise on the strong southerly winds currently firing them towards Cardiff. 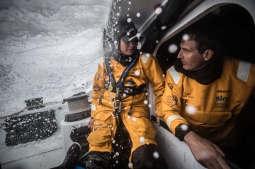 But all good things must come to an end – and the perfect conditions are forecast to change abruptly when the fleet hits a high-pressure ridge in the next 24 hours where winds are forecast to be extremely light.

The change could allow the chasing teams to catch up and may mean an effective re-start just 500 miles from the finish line.

That’s bad news for leaders AkzoNobel, who today enjoy a 10-mile lead on Team Brunel and almost 60 miles on third-placed Vestas 11th Hour Racing, but it is welcome news for everyone else. 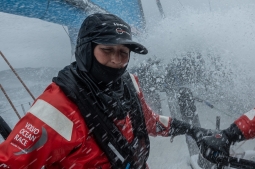 Especially keen to re-join their rivals at the front of the fleet are overall race leaders MAPFRE, currently in fifth place and some 100 miles off the pace, as well as Dongfeng Race Team, their biggest threat for the 2017-18 Volvo Ocean Race title.

“Right now we’re not in great shape – the first three boats have extended quite a lot, but that might change once we hit the ridge,” MAPFRE helmsman Rob Greenhalgh said.

“Importantly, Dongfeng are not so far away. It’s all to play for still and a podium this leg is still very much achievable. We just need the weather to play ball and a little bit of luck.” 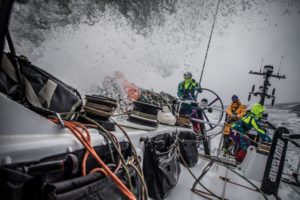 Leg 9, from Newport to Cardiff, day 5 on board Team AkzoNobel. The boat has been powered up and flying along for the past 24 hours.24 May, 2018.

“Ahead of us there is a wall of no wind,” said Dongfeng skipper Charles Caudrelier, agreeing with his rival’s assessment. “This means the fleet should compress a lot and there could be a new start! A finish like in Newport but this time it could be in our favour… The only small difference is that this compression is not 10 miles from the finish line but 600 miles instead.”

After the record runs of the past 24 hours, Caudrelier also cautions it could take three to four more days to race the final 600 miles of Leg 9.  The ETA for the leading boats to finish in Cardiff is the evening of May 28 with the bulk of the fleet arriving throughout the following day.