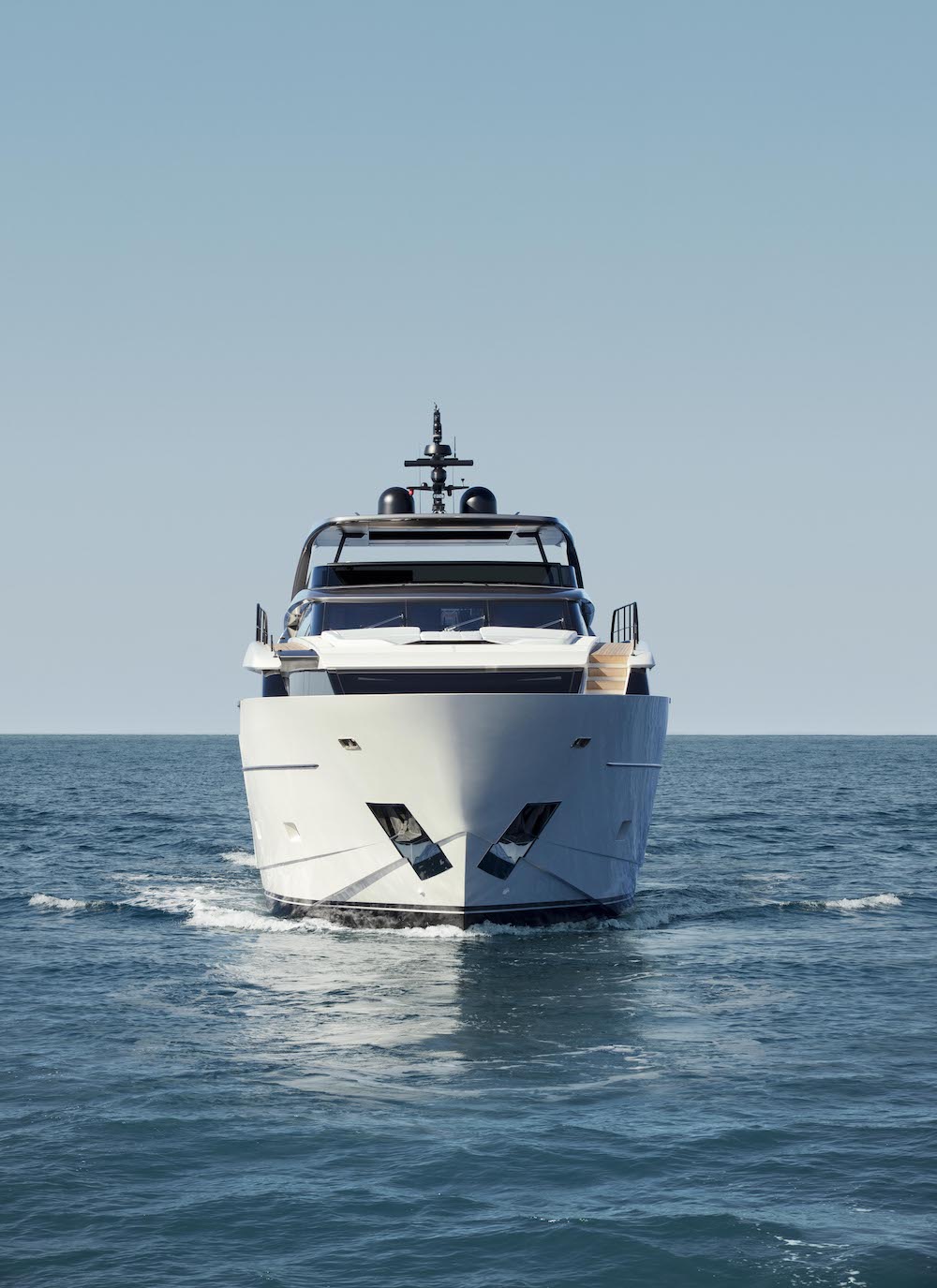 Questioning the status quo has always been part of the Sanlorenzo philosophy and now, with the new SL102Asymmetric, it rethinks one of the mainstays of yacht design: symmetry itself.

An enthralling and unconventional idea that came from Chris Bangle, the American design wizard whose work has innovated the car world and beyond, with Zuccon International Project’s Bernardo Zuccon providing the architecture required to make it all happen.

There are two main impacts of bringing asymmetry to a yacht. First, the spaces are more usable and secondly, there is greater communication with the outside world.

The SL102Asymmetric, in fact, only has a walkway on its starboard side, while the portside has a wide body design which allowed around 10 square metres of interior surface area to be clawed back.

Asymmetry has deep design roots and here clearly references the seven anti-rules of architecture described by historian and critic Bruno Zevi in his masterpiece The Modern Language of Architecture.

“As Zevi tells us, asymmetry is an element that crops up all the way back to the Propylaea and the Erechtheion of the Acropolis in Athens, even anticipating the staggered levels of  Adolf Loos’ Raumplan; and that is without mentioning medieval architecture which is incredibly rich in asymmetry such as the Piazza del Campo in Siena”, says Sergio Buttiglieri, Sanlorenzo’s style director. «It was a concept much loved by the great architects of our time too, not least Le Corbusier, to add dynamism to and resemantise the perception of their iconic architecture.”

Despite, its asymmetry, however, the SL102Asymmetric still retains all the styling elements and family feeling of the Sanlorenzo fleet: sober lines, beautifully balanced masses, deftly judged hull apertures, a sleek yet subtle superstructure. “The real challenge was to avoid changing Sanlorenzo’s history and tradition,” declares Zuccon. “Rather we wanted to respect the  incredibly strong image of the brand and the yacht. We wanted to innovate it without losing its identity”.

The asymmetry is crystal clear the minute one steps aboard. The wow effect hits right inside the saloon entrance. The portside’s wide body design and full-height windows create a real feeling of direct contact with the sea.

The Martina Zuccon-styled interiors are very elegant and sophisticated also, yielding a clever mix of classic and contemporary designer pieces. The flooring in the main saloon on the main deck is a luxe Burmese teak parquet by Cadorin, while Michel Club sofas by Antonio Citterio made by B&B Italia are matched with an Emperador marble-topped Bob occasional table by designer Jean-Marie Massaud for Poltrona Frau.

That said, Achille Castiglioni’s classic 1962 Taccia lamp by Flos looks right at home in the midst of that very modern setting.  The Avola limestone table on the portside of the saloon is a prototype by Salvatori which can convert from a coffee table to a dining table.

A terrace opens out on the starboard side and features beautifully simple furnishings sublimely made by B&B Italia Outdoor: the Awa coffee table in Cristalplant is by designer Naoto Fukasawa, while the folding Mirto Outdoor chairs are by Antonio Citterio.

The end wall is the focal point of the room and is comprised of two sliding bronze panels by Paolini. The master suite is forward on the main deck and features a charming original 1970s vintage chaise longue sourced by Galleria RobertoeBasta. Salvatori Avola limestone is used once again in the master bathroom.

There are four double symmetrical guest cabins on the lower deck also. The flying bridge, on the other hand, has a dining area amidships with a Mirto Outdoor table and Erica chairs, both by Antonio Citterio in addition to other B&B Italia Outdoor pieces. The Corina K2 bar unit is by Norbert Wangen for Boffi. In the relaxation area aft, the sofas and loungers are by Jean-Marie Massaud, also for B&B Italia Outdoor.