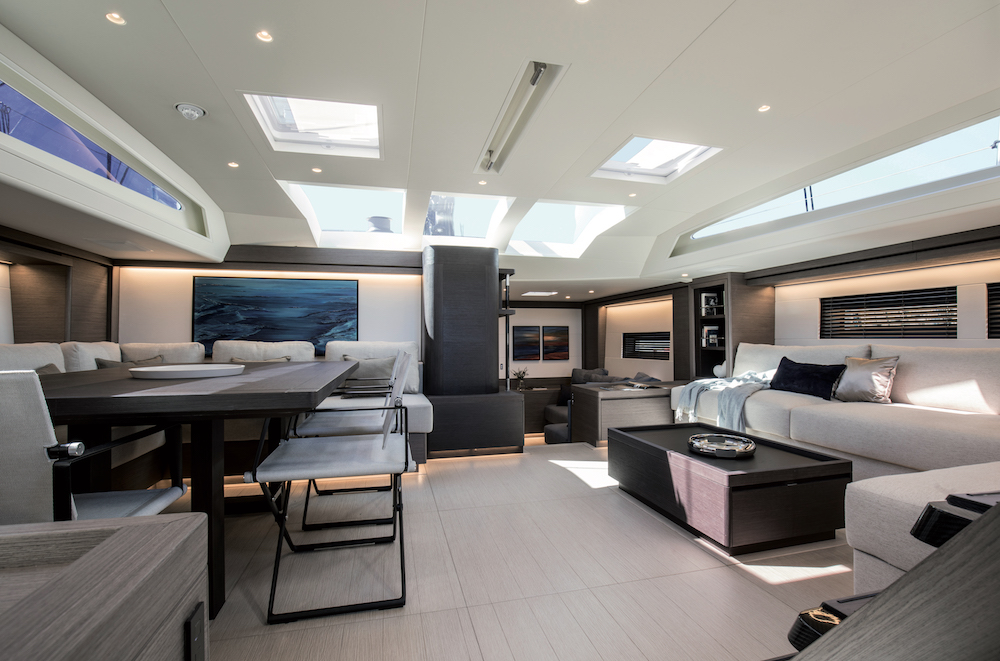 The first SW96 was honed for regatta racing but the second has been optimised for very high performance bluewater cruising with a comparatively short-handed crew.

Two very different interpretations of the same design that respectively produced the lovely Sorceress, launched in 2016, and now Seatius, splashed in March of this year. The pens behind the SW96 miniseries are old Southern Wind friends: Farr Yacht Design did the naval architecture while the general concept was crafted by the yard, Farr Design and Nauta Design which also styled the exterior and interiors.

That mix of talents attracted Seatius’ owner who, before giving the go-ahead for his Southern Wind, visited the yard in Cape Town several times to really get to grips with its construction techniques and philosophy. He also did his sailing homework, cruising and racing various SW yachts extensively in both the Mediterranean and Caribbean. As soon as he saw the drawings for the Southern Wind 96, he was won over,” says Jim Schmicker, vice president of Farr Yacht Design.

Won over he might have been but this was an owner with very clear cut ideas about how his boat should be. He pared it all down to one very simple idea, in fact: it had to be fast because he wanted to sail it all over the world. “We knew we had a great starting point in Sorceress,” continues Schmicker. “The challenge lay in honing some of the elements to make Seatius more cruising oriented.”

That said, everything needed to develop Seatius was already there in the SW96 miniseries design.  An beautifully balanced yacht with an LOA of 31.4 metres (29.39 metres excluding bowsprit) and a beam of 6.95, a hull designed to deliver comfortable sailing thanks in no small part to twin rudders and a very efficient steering system as well as an easy sailing sail plan and deck hardware.

In other words, the tweaks required to make Seatius a fast, safe go-anywhere yacht were confined to longitudinal jib tracks and hydraulic cars, plus  a fixed bowsprit with integrated anchor arm and fitting for the gennaker tack line and furling code zero. More extensive modifications were made to the aft section which was adapted to suit the owner’s requests.

“There is a lot that’s unusual, starting with the cockpit,” explains Massimo Gino of Nauta Design. “While Sorceress had a very classic set-up with twin helms and a large sun pad area between the latter and the guest cockpit, Seatius has side sun pad areas forward of the twin helms with a walkway in the middle leading to the guest cockpit. And all on one level too so there are no steps to negotiate to get to the aft cockpit.” Other bluewater cruising-focused tweaks followed. “The guest cockpit is actually sheltered by a hardtop dodger,” continues Gino, “while each of the helms is sheltered by a carbon-fibre bimini.

The result is a particularly modern layout.” Comfort is the priority also in the interiors which were planned around a mainstay of Southern Wind tradition, the forward master suite. “This is a significantly larger space than in the first SW96 thanks to the three-cabin layout,” Gino points out. The master suite is, in fact, immediately aft of the VIP stateroom while aft of the saloon is a third guest cabin, a twin. Also aft of the saloon and beyond the aforementioned cabin is the galley with the crew mess, the generous captain’s cabin which, unusually for crew accommodation, has its own en suite, the crew cabins and the chart area leading up to the helm station.

“We worked with a Dutch decorator brought in by the owner on the finishing of the interiors,” concludes  Massimo Gino. “We also worked with the owner to strike the best possible balance between the geometries of the spaces and a palette of pale and dark woods which create an attractive contrast.”

Seatius is Southern Wind’s 54th yacht but looks certain to be one of its long-standing stars: “Right from the start, it was clear that this owner had an eye for detail,” says Southern Wind’s technical coordinator Niki Jennings. “The relationship we developed with him really pushed us to deliver an even higher standard of construction and our upcoming builds will most definitely benefit from the experience we built up on this project”.