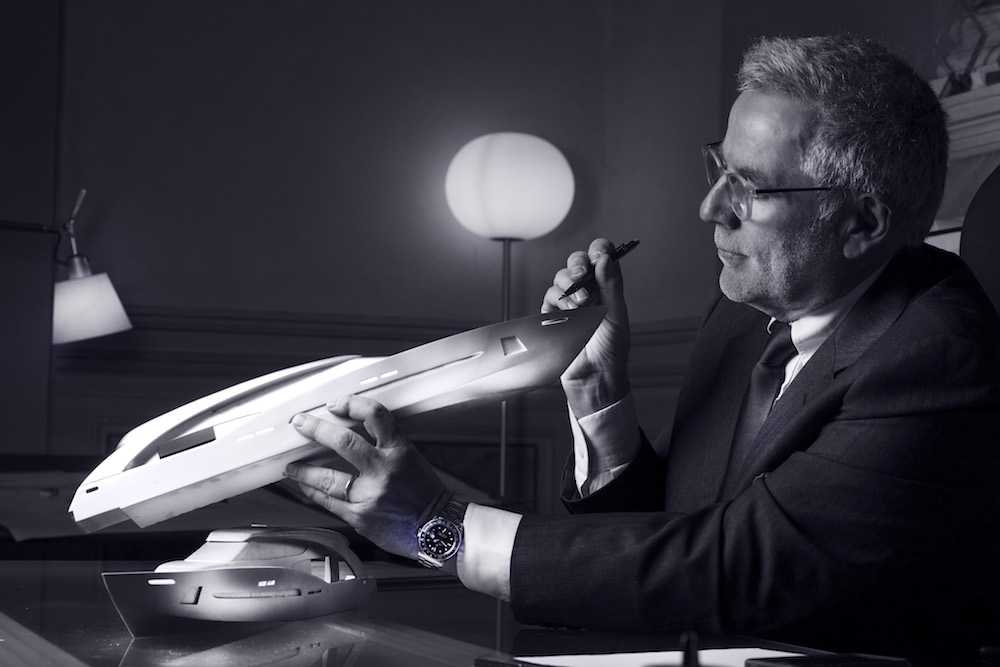 Tommaso Spadolini is celebrating the 41 year of his long and illustrious career but don’t ask him if he has any unfulfilled design dreams up his sleeve….he’ll fling open the doors of closets bursting with designs for yachts of all shapes, sizes and kinds. Sketching and designing boats is virtually an automatic reflex for him at this point. He does it everywhere: in his studio, on. It’s more a mind-set than work.

Tommaso Spadolini was born into the sector. His father, Tommaso Senior, is widely considered one of the founding fathers of modern yacht design together with Paolo Caliari, Alberto Mercati and Aldo Cichero. He was also the first architect in Italy to be given a professorship in industrial design.

“I was the youngest of five children,” explains Spadolini, “so to get to spend a little time with my parents, I used to go to the yard with them on Saturdays and Sundays. My mom and dad also always took myself and my siblings out on the boat too. So that’s how I got my nautical culture: through familial osmosis!”

After initially working with his father’s studio and the Cantieri di Pisa, Tommaso Spadolini struck out on his own, starting with what he loved best: Barberis sailing boats. Then he turned the Canados yachts into a success.

A commission for the King of Spain later established him as one of the big boys in the yacht design world. It would be virtually impossible to list all the literally hundreds of boats he’s worked on over the last four decades.

Standouts include Numptia for Rossinavi and the wildly famous RC for Roberto Cavalli.
All craft, however, that made a mark and share Spadolini’s inimitable design stamp of clean, sober, spare lines. “To me, design is all about having a vision of an object that has to serve a purpose.

It can’t just be designed for its own sake. It has to have a story, logic, functionality and, above all, soul. Nautical design in particular also has to follow the iron-cast rules of form and function,” he explains. All Spadolini-style, of course. And that means starting out with a hand-drawn sketch before the project is developed.

“Drawing underpins everything. I personally always draw by hand because I believe it’s the only way to communicate emotional content and the soul of an idea. Plus I am completely obsessed with pens, paper, kneaded erasers, and all the tools most people now think of as obsolete,” he explains.

“A while back I took part, as a lecturer, in a workshop on yacht design at La Spezia. There were 10 Italian architects and 10 American architects  doing the course and on the first day I handed them a sheet of tracing paper and a pencil. Most of them didn’t have the faintest idea of what to do with either the pencil or the tracing paper. So I made them draw for the whole day.

The following morning we scanned their drawings and in the afternoon, we started working on them on computer. Even though I use an iPad and computer, it is still inconceivable to me to give form to an idea directly on a computer.” Despite being one of Italy’s most renowned motoryacht designers, Tommaso Spadolini is actually a real sailing yacht fan.

He is currently the happy owner of a 1985 Baltic which is one of only a few with a furling mainsail. He does have a secret dream though. His cupboards are bursting with designs. But there is one vital project missing from that long list: that of a 15-metre sailing yacht with a central cockpit that he dreams of building himself sooner or later to sail with his pals.

Currently, Spadolini is hard at work in his studio in an old deconsecrated church in Florence on a range for the newly-minted Rosetti Yachts, a new boat for Roberto Cavalli and another series of projects about which he remains resolutely tight-lipped. That is not counting, of course, the designs he scribbles here and there and which sometimes make the leap from paper to waves….