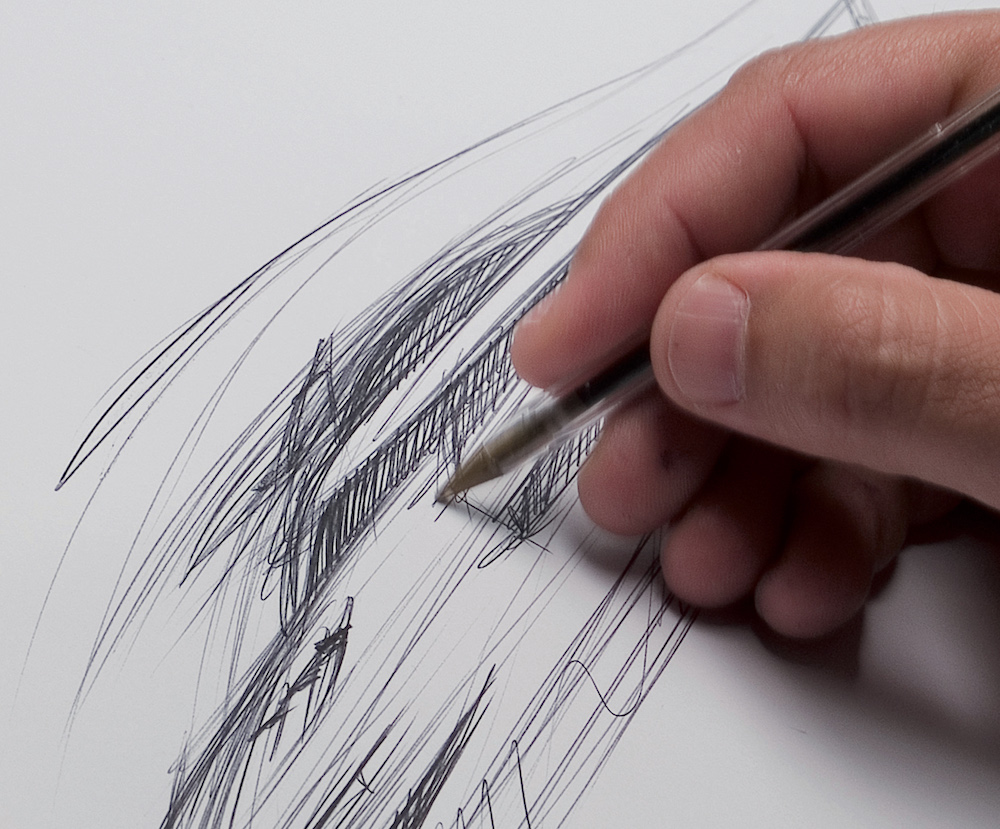 “I haven’t been without a pencil in my pocket since I was a boy”.
The son of an advertising graphics designer who took him to exhibitions of all shapes and sizes, Francesco Paszkowski, who was born in Milan but is Florentine by adoption, drew anything to grabbed his attention from a very early age.

«It might have been a car I saw through a train window when I was travelling to an exhibition with my father or the helmet of a motorcyclist waiting at traffic lights while I was crossing the road.  I drew anything that attracted my attention wherever I was.” So even now, all Paszkowski’snew designs start with a sketch. «Freehand drawing is vital to me. The mark made by a pencil on a blank sheet of paper is a universal language understood by all, a way of turning an idea into a sign. You can do it anywhere, anytime,” he says.

Paszkowski decided to become a designer after visiting an exhibition of Giorgetto Giugiaro’s work in  Milan. “I just said to myself there and then that I wanted to be a designer when I grew up,” continues Paszkowski.

Like many yacht designers, Paszkowski started out wanting to design cars but fate intervened. After a short spell in Pierluigi and Tommaso Spadolini’s studio,  Francesco Paszkowski struck out on his own in Florence in 1990.

Hundreds of designs followed, spanning the spectrum from custom to production yachts, planing and displacement, interiors and exteriors. However, Paszkowski’s first encounter with the yacht world actually came about quite by chance. “In 1991, I met Michael Breman who was then the director of Baglietto. He showed my portfolio to an Austrian client. When he saw the designs, he said I could try doing one for him but that I would really have to knock his socks off. I managed to do just that and the result was Opus I, which, at 29 metres, was then the largest open on the market at the time.”

A few years later the same owner returned for a fly he wanted Heesen to build and that partnership produced Opus II.

Paszkowski continues to work with both Baglietto and Heesen but has added many more yards to his client list, including Sanlorenzo, CRN, Custom Line, Benetti, Turquoise Yachts, Isa Yachts, Canados and Tankoa.

Although Paszkowski’s approach changes somewhat depending on whether the boat is production or custom, he is equally enthusiastic about the two types of craft. «Being able to work in both environments is one of the advantages of this great job because they are different and so you never get bored,” explains Paszkowski.

“Custom work involves developing a very deep understanding with the owner because you have to translate a person’s very specific desire into a unique project that in some way evokes the preciousness and exclusivity of a handmade object yet within the owner’s budget. When you are creating a design for a series, you have to keep in mind the fact that you need to meet the tastes and needs of different potential owners and for a longer time span. In this particular instance, designers have to anticipate trends and be able to look well ahead in time to get a handle on how tastes will evolve, while the economic constraints are dictated by the product strategy and the investment made by the commissioning yard,” explains Paszkowski, adding: “In both production and custom projects, you need a knowledge of the yard’s skills, strong teamwork with its technical office and all the other stakeholders, plus the awareness that boats are born for the sea regardless of the aesthetic value they may acquire. You also have to take into account essential factors such as dedicated materials, the use of safety-focused technologies, structural and functional constraints, and consumption to create a balanced combination,” he concludes without letting slip whether he is making a jab at the growing numbers of designers coming into the sector from outside the nautical sphere.

By his own admission, however, Francesco Paszkowski feels that the presence of so many very different players on the yacht design scene is a good thing because it guarantees the sector broader scope for comparison. He is equally convinced designers should not have absolute power and that the success of a project doesn’t ever depend on one single person but on a team comprising the owner, yard, designer and naval architect.

Paszkowski says that the fact that boats are becoming increasingly alike is not because designers are copying each other but simply failing to do their research. “Inventing something new is not as easy as it may look,” he explains.

“In our sector, we perhaps don’t have the kind of technological and stylistic research that generates innovation but which you do see in other sectors such as car design.”  He adds: “In yacht design, the details that don’t spring to the fore at first glance are what usually make the difference.”

Paszkowski is laconic about future projects. Three designs by his studio will be premiering at the Monaco Yacht Show: the new Custom Line 120, Tankoa’s 72-metre Solo and the stunning 48-metre Baglietto T-Line. Two further designs, a 55-metre displacement and a planing 46 Fast Fly for Baglietto, are currently in build. There are a few other craft in the mix about which the designer remains tight-lipped, however. Only time will tell….