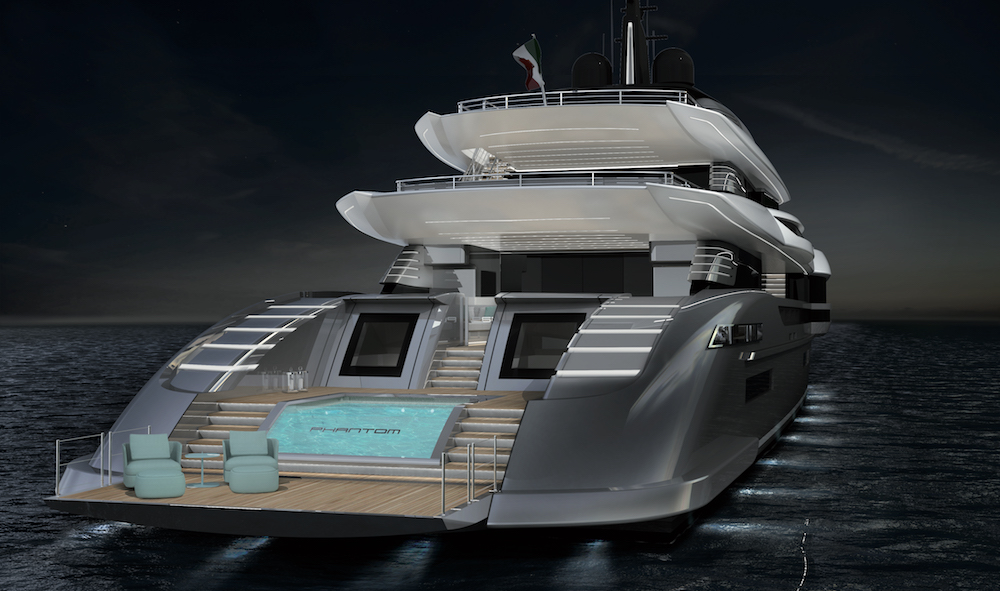 Phantom 62 by Team for Design

A design with a distinctly different stern.I think it’s the most distinctive element in this large, unique sports yacht, which has a clean, well-balanced exterior design”. For Enrico Gobbi, the Phantom  62 project developed by his Team for Design is truly special, not only because of the unusual stern but also this 62-metre craft’s exterior lines, which he describes as elegant and precise. “This project is the first time we’ve developed a completely new stern shape. This new configuration presented a tough design and engineering challenge”.

In almost direct contact with the sea, also made possible by a spectacular glass wall, the swimming pool is flanked by a short flight of steps leading from the aft platform to the beach platform around the pool. This space is in turn connected by two entrances to two lower deck interiors. “These spaces”, says Enrico Gobbi, “Can be fitted out as a gym or lounge. The current trend is to make much more use of a yacht’s outdoor spaces than we used to. That’s why the solution we’ve adopted for the Phantom 62 is an emphatically open aft area that provides larger external spaces. All elements should reflect a modern yacht’s requirements. One example is the area dedicated to the classic interior dining room, which is smaller than usual. This area in its classic form has almost disappeared. The preference now is to create convivial settings in the open air”.

The Phantom 62 joins a long series of yachts begun in 2007 that Team for Design has designed for the Rossinavi brand, which was founded in the 1970s by brothers Claudio and Paride Rossi and specialises in superyacht construction. The list of other Rossinavi yachts bearing the signature of Team for Design include the Ketso 48, the two Prince Shark 49m launched bearing the names Param Jamuna IV and Polaris and the 62-metre FRO31 Utopia IV, while others, like the 70-metre FRO37, are still under construction.

“The Phantom 62 is an emphatically modern design. As well as its overall qualities and ample external spaces it offers, for example, another extremely fashionable element that’s much in demand these days – large windows that create communication between the interior and exterior. On the Phantom 62 the long strip windows running along the main and upper decks give the yacht the impression of greater length and encourage and enable highly flexible interiors, two extremely important elements in the overall proposal”. The aft area and long windows are not the only distinctive features of the Phantom 62’s exterior design. Two in particular involve the lines and volumes of the yacht’s sides. “The two full-height bow windows in the owner’s area certainly stand out. They extend the internal space and create a sporty element.

Another distinctive feature is the markedly rounded contours at the level of the upper deck lounge, which create room for extensive window areas and further enhance the interior-exterior link. This link also exists on the main deck, with the opening stretching all along the walkway parapets”. Enrico Gobbi also points out two elements that reflect the dynamism and sporty nature of the design. “The bow to stern sweep of the elements at the sides of the flydeck supporting the central hard top has a very dynamic appeal. This feature is repeated in the elements linking the decks. Another of the Phantom 62’s identifying features is the solution aft of the terraces with a shape inspired by aeronautical design”.

The Phantom 62 has already attracted the interest of an owner who has asked Enrico Gobbi and his Team for Design to develop interior furnishings reflecting the exteriors.  “We thought of fresh, modern furnishings”, says Enrico Gobbi in conclusion. We’re working on a proposal that brings this inside the yacht. If all goes well it would be a perfect embodiment of the overall spirit of the Phantom 62”.