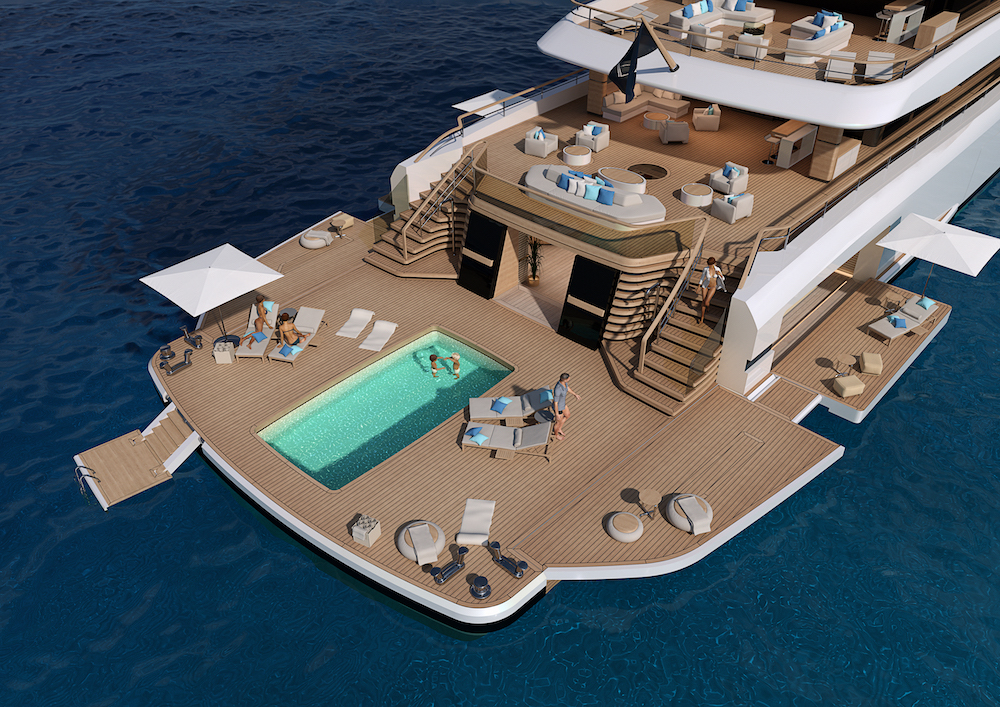 “We want to bring life aboard as close as possible to the sea, to nature, to the environment, so that people can enjoy what is around the yacht as much as possible”.

In 2007, Mario Pedol and Massimo Gino of Nauta Design presented the 80-metre Project Light which ushered in a radical new concept that took the motor megayacht design world by storm and ever since have continued to centre all their designs around that core ambition.
“We were the first to dedicate more space to the exterior than the interior in megayacht design,” say Mario Pedol. “That was an innovation compared to what the market was offering back then. We actually feel that the only reason to invest in yachts the size of a ship is to be able to enjoy what is around you in the most direct way possible”.

This philosophy is evident in Nauta Design’s latest project, the Nauta 78m Slipstream, which stretches 78.4 metres in length and 13 in the beam. The design is ready to build and also features a Nauta Design patent for a series of platforms which open out to create one continuous terrace around the transom area a metre above the water.

“The patent was to complete the process. The idea was to create a kind of 270-degree walkway that embraces three sides of the transom,” explains Pedol. “To achieve it we inserted a connecting element between the side terraces that open out over the sea at beach club level and also the fold-down side platforms which are a continuation of the usual large aft terrace.  This creates a single level space that means guests can simply walk from one side of the boat to the other in complete freedom, either from the interior of the beach club or from the stern. We patented this concept of unhindered movement and its solution. Not to prevent others from using it but to formalise our idea as intellectual property,” continues Pedol.

The idea has elicited huge interest and makes the Nauta 78m Slipstream unique as between interior and exterior space, her beach club covers 22 square metres. Guests can move about, choosing either sun or shade, or the various views of the surrounding seascape. “We decided to call this aft lounge area with its folding-out platforms The Island because it really is surrounded by the sea,” concludes Pedol.

An island it may be but a very comfortable one as the design features an interior zone that includes a bar and a lounge with views of the seafloor through a glass panel. This is one of the unique features of the interiors which, just like the exterior design, have a very clear Nauta stamp to them. The yacht’s profile lines are clean, spare and light with long apertures not just on the main deck but also the two above it. This is reflected in the interiors which although still at the proposal stage, are dominated by the constant ebb and flow between inside and outside spaces.

A good example is the owner’s quarters which extends across the entire upper deck and includes a lounge and dining room for the family in addition to service areas. The former can both be used in all climes too because they can be enclosed by sliding glazing and air-conditioned. The master suite proper, which lies forward, has a spectacular and unique private outdoor area complete with a Jacuzzi.  “The connection between interior and exterior continues in the communal areas,” explains Mario Pedol. “For instance, the saloon on the main deck, which is over 100 square metres, opens directly into the al fresco lounge of almost the same size”.

With its generous spaces, constant interior-exterior dialogue, and clean lines, the Nauta 78m Slipstream has all that and more. In fact, it also adds in diesel-electric hybrid propulsion and the opportunity to install new generation batteries that will deliver carbon-free propulsion.  One final signature of a design that really does brilliantly epitomise the beautifully balanced and personal Nauta look at its most recognisable  and which Mario Pedol refers to as sexy. “Slipstream has soft, attractive lines, and instantly reveals all the various functions available to guests to enjoy the sea”.