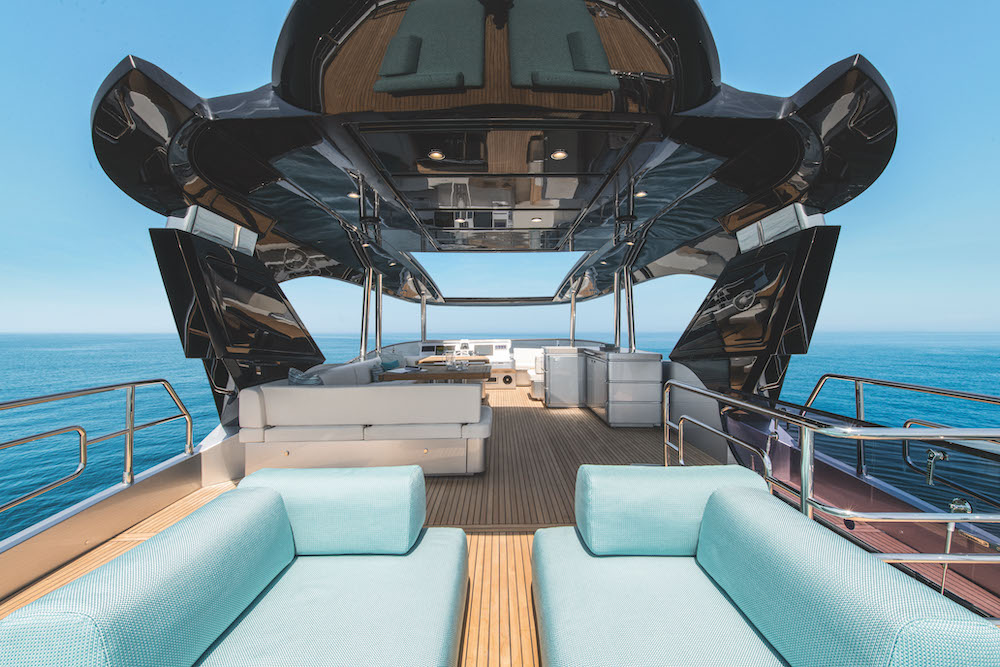 Passion and perseverance were the bywords as Monte Carlo Yachts celebrated its first decade in business and present its latest model, the Monte Carlo MCY 76, the successor to and evolution of the original MCY 76 that launched the Bénéteau Group yard’s career.

“This version and the first MCY 76 are two completely different boats,” explains Carlo Nuvolari who has been penning the Monte Carlo Yachts models with his partner Dan Lenard since the yard opened in Monfalcone just outside Trieste.

“The new MCY 76 is the result of our unswerving belief in what we had done. And in our confidence that it had value, something the market has confirmed. A market that has endured some tough times but you can’t allow yourself to panic”.

Sales aside, confirmation of the solidity of the choices made in 2010 when the first MC76 left the yard came in the form of the Monte Carlo Yachts collection which will now number seven models.  All of which share what Carlo Nuvolari refers to as “emotional coefficients”. “Those aren’t cold numbers but a mix of many different elements. Of course, there are numbers involved too.

The boat designer’s job is to create a kind of music that is about more than just aesthetics”. That philosophy has now produced the new MCY 76 which reaffirms Monte Carlo Yachts’s mission to imbue luxury with renewed value. The value of time, style and elegance. The value of space, responsibility and well-being. The value of people.

At 23.06 metres in length and 5.75 metres in the beam, the  MCY 76 has a different profile to the 2010 model  but Carlo Nuvolari and Dan Lenard have still held fast to their creative beliefs. “We succeeded in raising the bows of the motoryachts built in Italy where design is heavily influenced by car design,” says Nuvolari. “We went against that with Monte Carlo Yachts with the result that their models are influenced only by the yachting world”.

The family feeling is underscored once again in the new MCY 76 as part of an evolution that has produced a yacht with side portholes that differ from its predecessor in terms of their shape, number and size but which flood in the interiors with light.

The design of the superstructure exudes both power and elegance at once. There is a feeling of very solid formal and functional decision-making. Of an awareness of its own uniqueness. The new MCY 76’s al fresco areas are equally unique, starting with the flybridge which is protected by a carbon-fibre hard top and a large roll-bar.

To port are a sofa, the skipper’s chair and the bridge. To starboard, beside the bridge, is another sofa for guests and then an al fresco galley. Lastly, there is a generous sunning area aft. The main deck too has plenty of areas where guests can experience the sea at first hand.  Aside from the classic cockpit, there is a wonderful seafront terrace forward.

Furnished with sofas and occasional tables, it offers gorgeous sea views and is reached by side walkways that run into one another amidships ahead of the windscreen. A Monte Carlo Yachts signature.

The fit-out too is very special and likewise the beautiful craftsmanship of the yard’s artisans in the interiors. From the saloon furnished with sofas of various sizes to the dining area with its Carrara marble-topped table, the galley behind the steering position and the sleeping quarters on the lower deck. There the colour palette centres around white and grey oak as well as fabrics by  Pierre Frey, Hermès and Rubelli which work together to enhance the spaces: the master suite amidships, the double cabin forward and the two twins on either side of the central corridor.

The interior décor is understated but luxurious, its impact underscored by polished dark wood and steel inserts, producing a series of hugely seductive spaces. “We worked on innovation and continuity with huge attention on detailing,” concludes Carlo Nuvolari. “The result is a desirable yacht. And our aim is to keep designing these desirable yachts. Craft that have the potential to become icons”. Something that, 10 years after its launch and with the new MCY76, Monte Carlo Yachts is proving it has achieved in no uncertain terms.