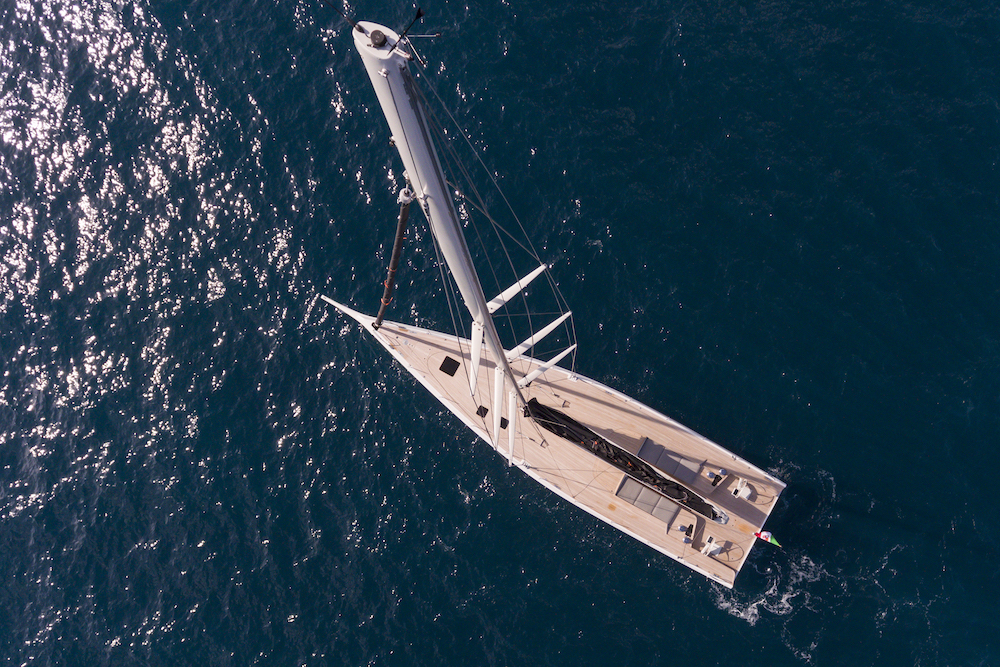 An owner on his first sailing yacht and a yard that, after veering into the motoryacht world, now returns to sailing.

Founded in 1987 and managed by MD Technologies since 2016, Maxi Dolphin’s last sailing build was the 100’ Finot-Conq-designed Nomade IV after a long series of boats that included the MD67 Nacira, also by the French studio, and the German Frers-penned 118’ Viriella.

It was this encounter that led to the birth of Karma, the new Maxi Dolphin MD75 by Mills, which splashed this spring and was immediately whisked off on a cruise of the Mediterranean by her smitten owner.

The latter is quite the individual. He adores the water but normally confined himself too wind and kite-surfing but decided to build himself a sailing yacht to take his family cruising aboard and still enjoy the feeling of the wind in his hands.  As he is also a kite foiling fan, speed was another of his must-haves.

“Karma is a super-fast-cruiser,” explains Luca Botter, CEO of MD Technologies. “We had already worked with project manager Lorenzo Loik when he came to us with a proposal for a project by Mark Mills for this owner on his first boat. It had to be simple, fast and easy to handle.

We knew that kind of concept well and had already built them albeit on a smaller scale. The project was very exciting because we were moving from two boats penned by the French studio (Nomade IV and the MD67 Nacira, ed.’s note) to Mills’ cruiser/racer lines. We started with the mould in 2017”.  This is one of Maxi Dolphin’s signatures: doing everything in-house from the mould, if required, right up to the launch.

“A carbon hull and deck,” explains engineer Giovanni Pizzatti, the yard’s technical director and co-founder with Botter of MD Technologies . “Vacuum laminated and cooked at 60°C, Core Cell for the sandwich, Gurit materials, lightweight interiors and furnishings in sandwich. It’s all normal today. Particularly for us because we were one of the first to take this approach. We started laminating the hull in September 2017 and the boat left the yard in February 2019. Under the contract she was to be 26 tonnes.  Well, she was 26 tonnes on her launch. Not a kilo more”.

Clothed in ultra-taut lines (23.86 metres LOA, 22 metres along the waterline) with a beam of 6.1, low bulwarks and a 32-metre carbon mast designed by Chris Mitchell with a square top mainsail,  Karma is extremely simple yet has a decidedly sporty appeal.

This is due in great part to her flush deck and the fact that her sail controls run under the deck with winches just ahead of her wheels. This means guests can move around freely and also have a central cockpit with generous seating and a large table to relax in.

Karma’s severity of line and simplicity are continued in the interior for which Nauta Design – on their first collaboration with Mark Mills – did both the layout and design.

The styling is described by Massimo Gino of Nauta Design as “not minimalist but very, very comfortable and warm”. The interiors were made by Maxi Dolphin’s own craftspeople and feature a central living area with dining sections and sofas with the sleeping quarters, comprising the owner’s cabins and a two-berth guest, further forward. In the saloon, the galley and access to the crew quarters are to port, and there is also a second guest cabin.

Open pore oak with a distressed finish and light linen-like panelling make a charming pairing.  Sunlight pours in through the hull windows and, in the living area, through the skylights. There are spotlights under the handbasins in the bathrooms too.

Karma is an MD75 by Mills and her interior layout is flexible to various different configurations.  “The great thing about the MD75 by Mills” concludes Luca Botter, “is it is a semi-custom model so it will be able to meet the requirements of any owner that wants a fast, sporty, comfortable boat using Karma’s great qualities as a starting point”.