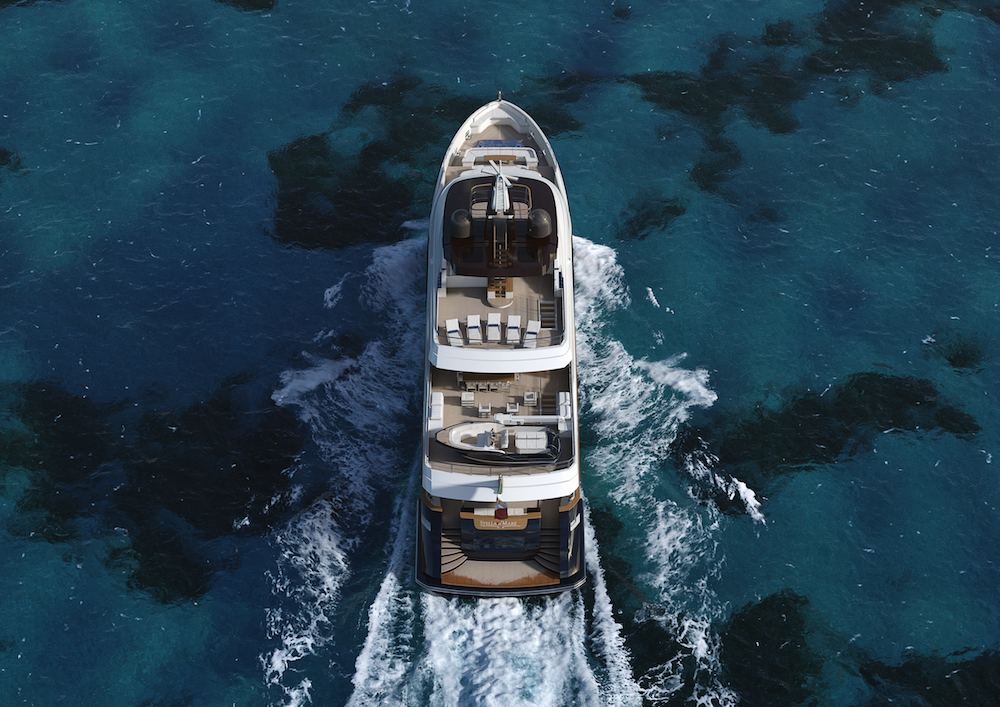 An impassioned owner wanting to upgrade from a 30-metre explorer to a yacht with more space and a better range to allow him spend longer periods at sea. 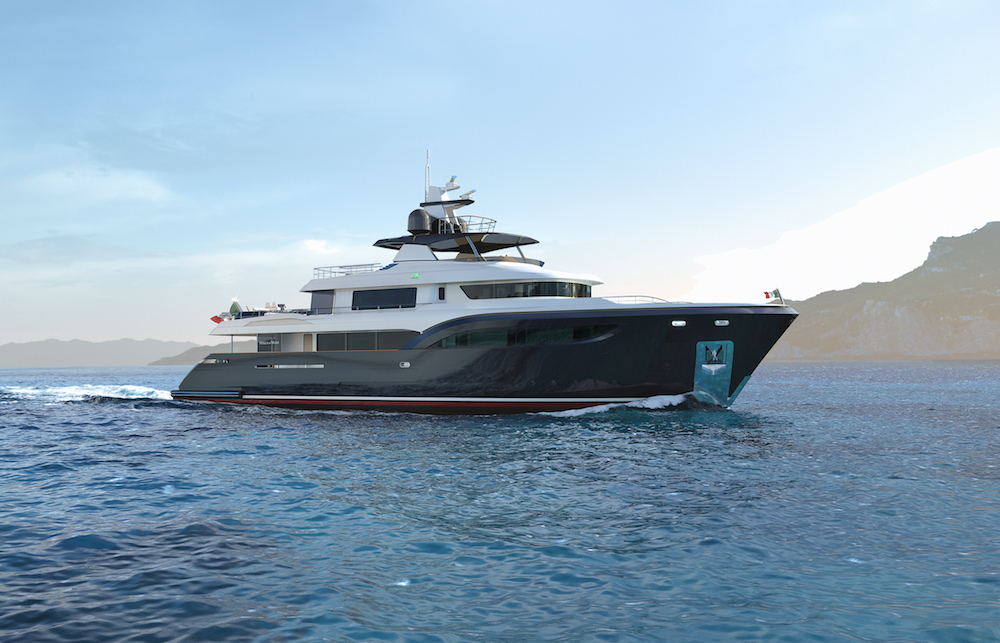 “Oh yes, long passages, getting to distant seas and also for just lying at anchor without having to go into port for a month yet still have all the necessary – fuel water and provisions – to hand,” explains agreed Sergio Cutolo, the founder of Hydro Tec, the studio behind the design of the M40 Explorer splashed by CBI Navi at the end of June as Stella di Mare. 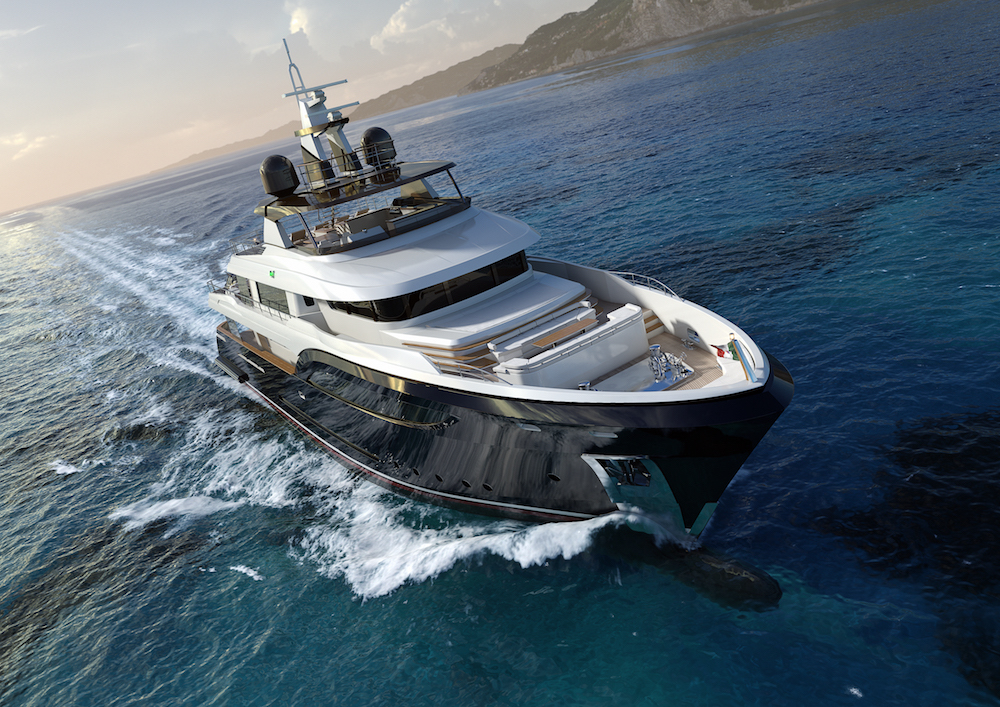 “Our discussions with the owner, whose previous explorer we’d also done, were important and we believe we’ve met all his requests whilst still respecting the characteristics of what an explorer meant to us and our holistic design philosophy.”

The result is a project that deftly melds exterior design, engineering and naval architecture into one smooth package. “As happened last time, this project also involved designing the tender,” continues Cutolo, 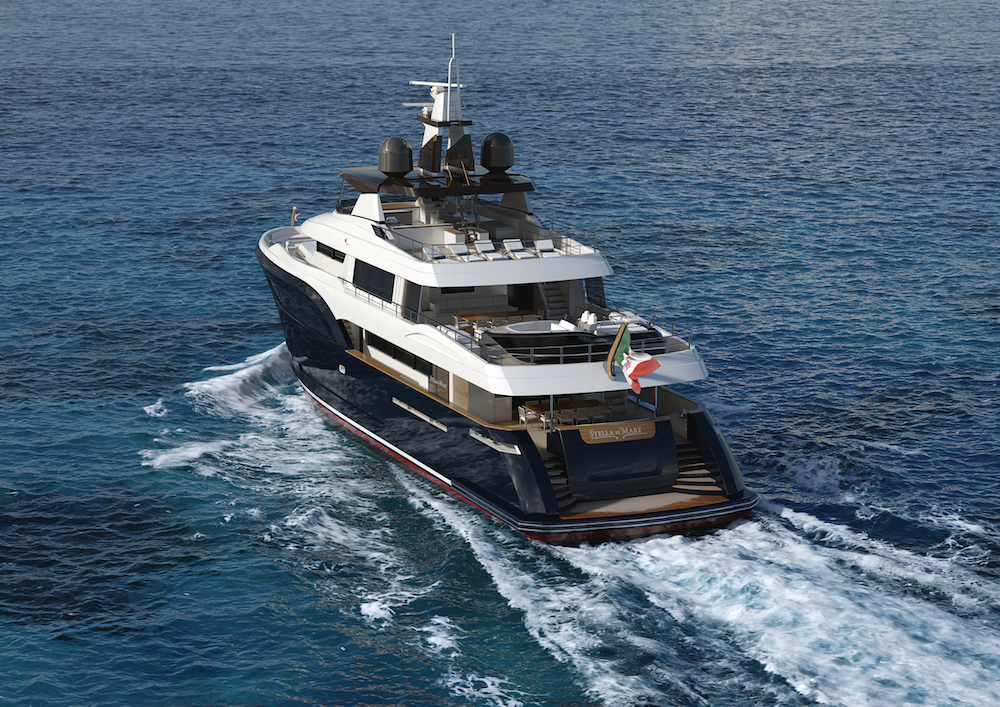 “It is a fast, light boat that mirrors the style of the explorer and, thanks to an opening bow section, allows passengers to go ashore as comfortably and safely as possible.” Sporting a tank-tested hull, steel construction and a bulbous bow designed to tackle seas of all kinds, the new Explorer M40 is spread over three decks plus a fly topped by a hard top complete with observation point. 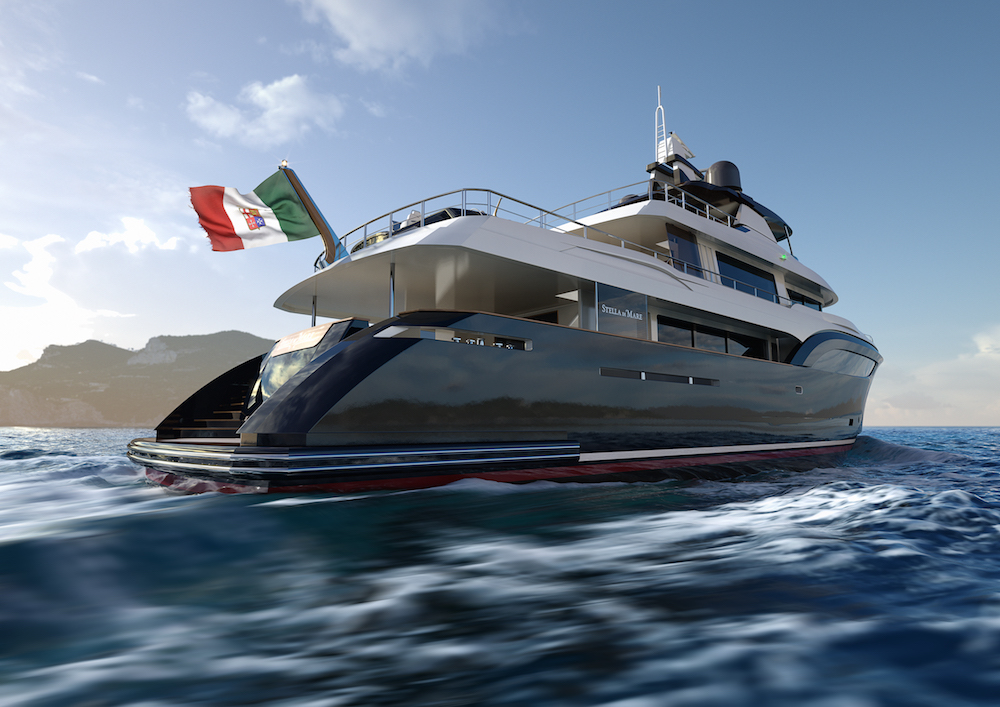 The impression is of a very comfortable round-the-worlder that also delivers on space thanks to her 8.6-metre beam. “The style we went for might be described as post-modern: it’s elegant but unshowy,” says architect Umberto Fossati of Fossati Design Bureau which crafted the interior design. 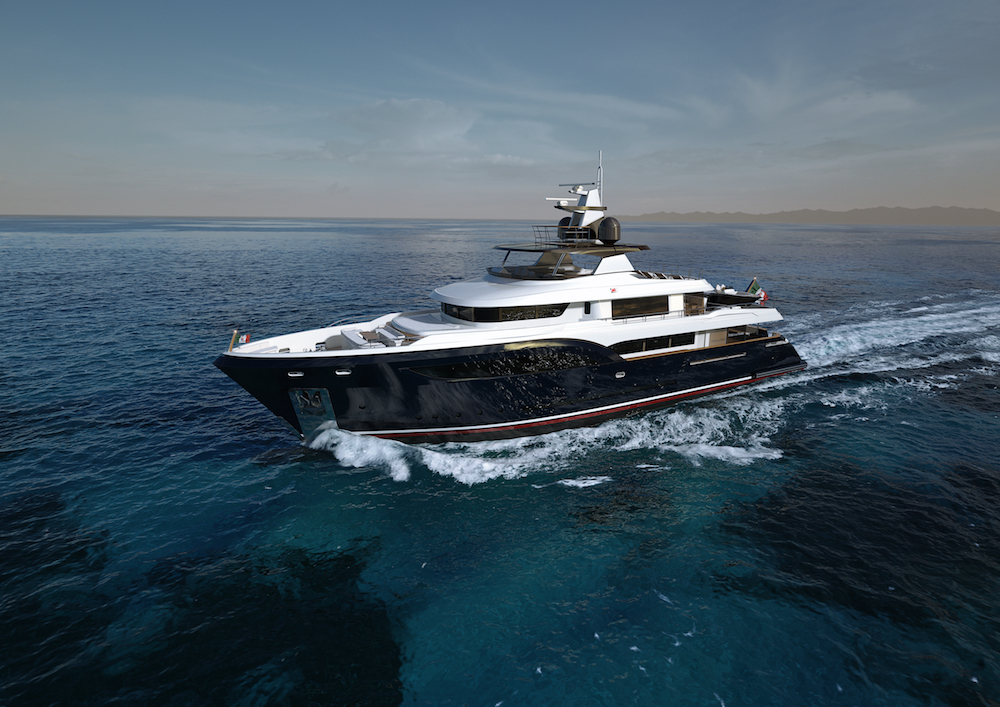 “The most important decision was the matt finish – there is no gloss at all. Starting with the brushed burnished bronze inserts. The wood we used is Canaletto walnut and one of the peculiarities of the décor is that all the elements have a border. 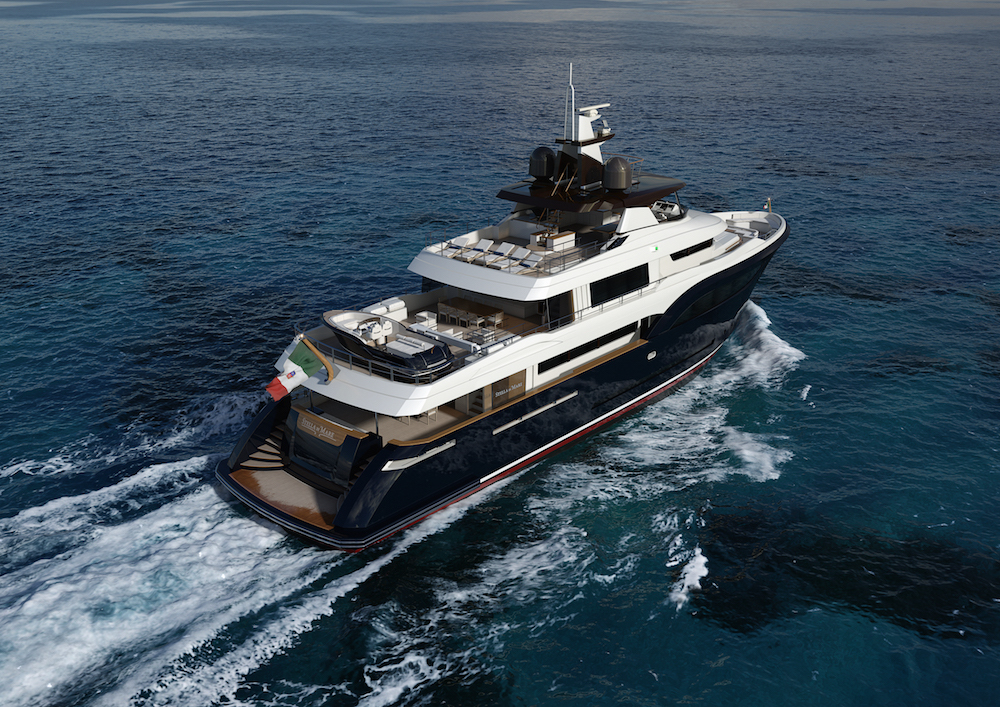 From an architectural perspective, the transparent section on the fly bridge that draws light into the stairwell is unusual too.” Offering a possible 14 berths in four guest cabins (two two-berths with Pullman berths, one four-berth and a VIP) and a master suite on the main deck, the Explorer M40 is destined mostly for family use but still also packs a technical punch.  In the interior layout, for instance, a protected passageway leads directly from the crew quarters to the engine room and the service areas aft where all the electrics and hydraulics are stowed for ease of maintenance. More generally speaking, this is a very eco-friendly yacht as it fulfilled all the criteria for Green Plus notation awarded by the Italian Naval Register, Rina. 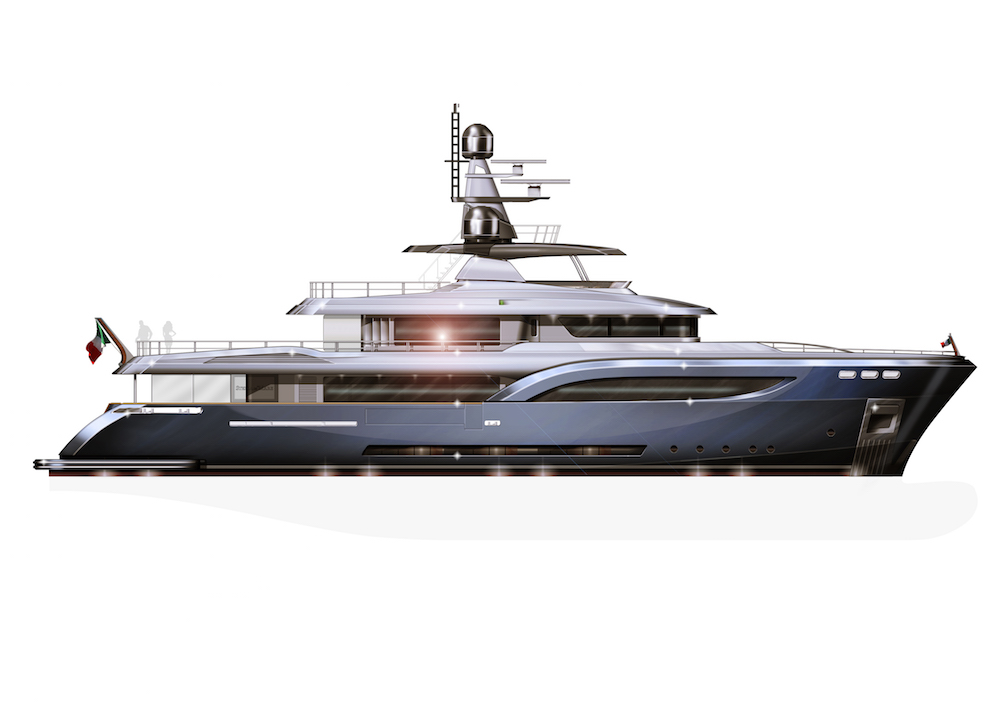 “There are water purification plants, compartments for collecting and stowing solid waste, a cold room and everything else needed for RINA to award the Explorer M40 top marks,” continues Cutolo proudly. 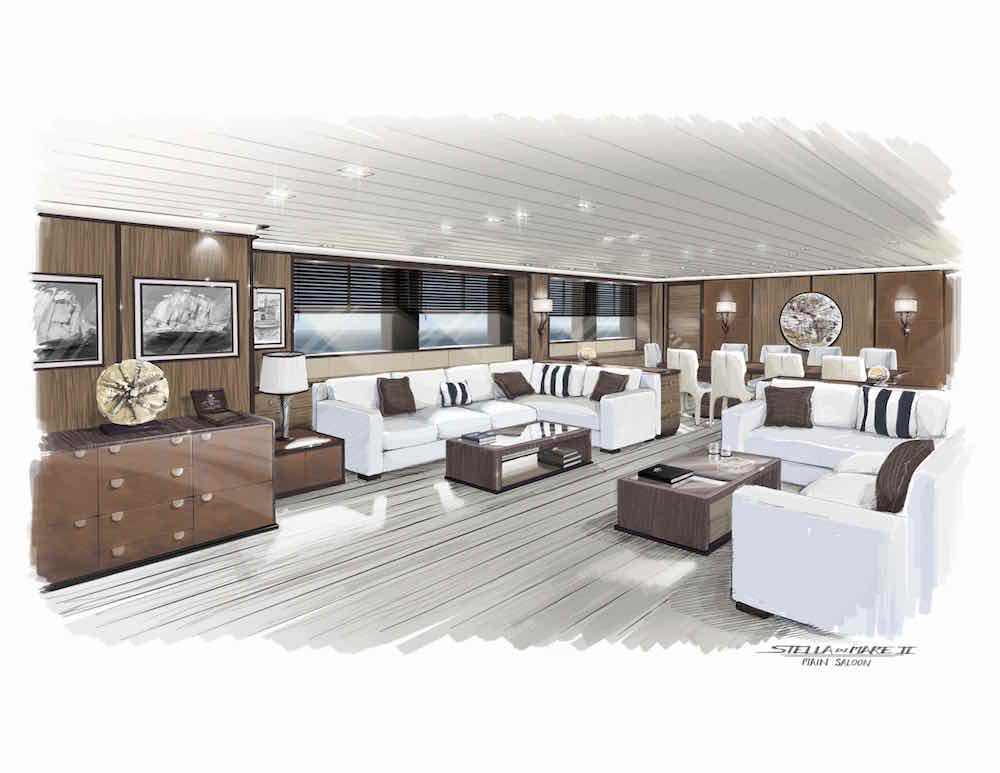 Added to this is one further eco-friendly element that sets Stella Mare, which has 75,000-litre fuel tanks, apart: fuel efficiency. Her twin 746 kW Caterpillar C32 engines will burn just 80 litres of fuel an hour if she maintains a steady 10 knots. “That is very low,” concludes Sergio Cutolo. “We even bet with the owner about the fuel consumption figure. He asked for an explorer that combined modern, linear elements with classical curved ones to create a timeless design. 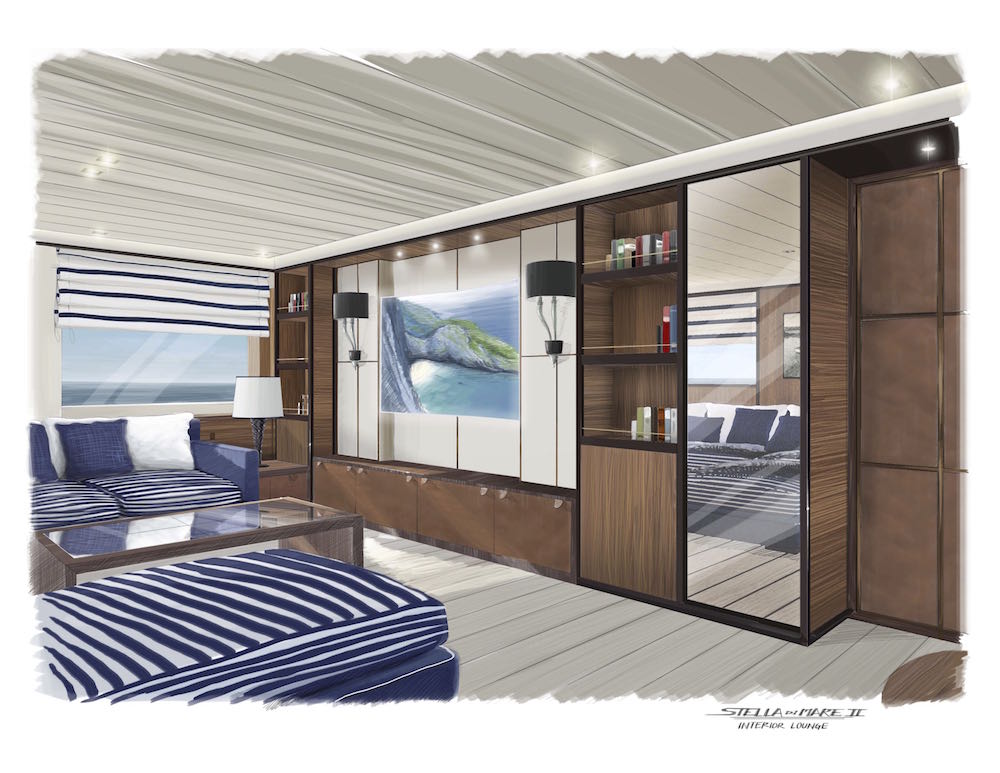 But he also wanted superb seakeeping and comfort as well as the capability to embark large amounts of fuel. Plus the craft had to be very fuel efficient on top of all that. But we believe we succeeded in giving him that combination too!”