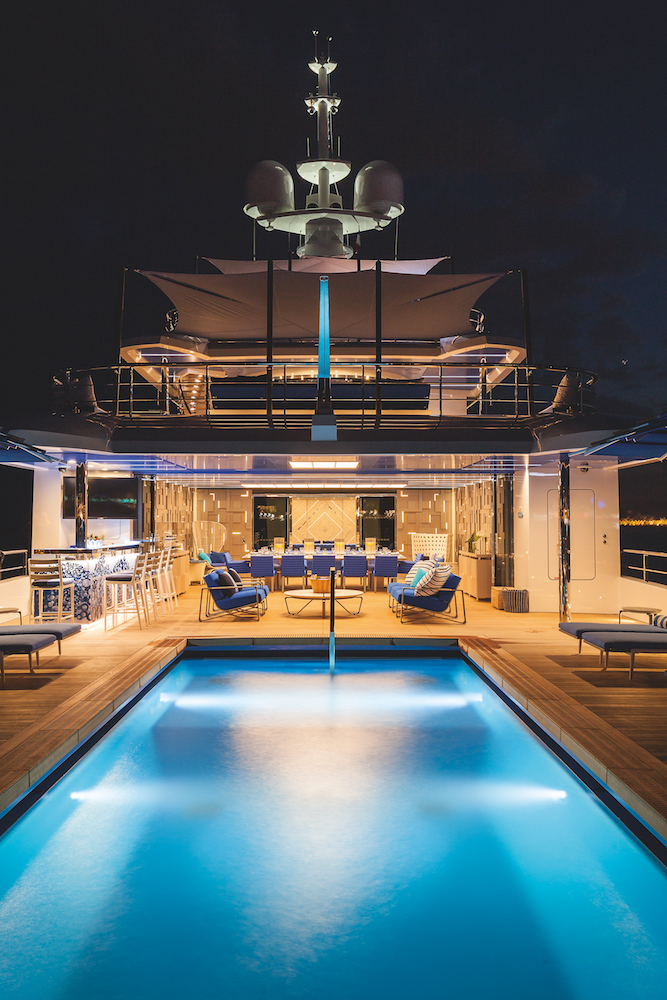 In 2012, Benetti launched the Design Innovation Project, a creative contest of sorts in which 16 of the world’s leading yacht designers participated.

The resulting design concepts were officially unveiled on the opening day of the Monaco Yacht Show in what felt like love-in for journalists, sector movers and shakers, and yacht designers alike…

Now, however, one of those concepts has become a reality and is riding the waves.  Seasense has an intriguing backstory, to say the least. Seven or eight years ago, a wealthy middle-aged New York businessman with interests in the real estate, film, fashion and sectors, decided to buy himself a new boat.

He already owned a 27-metre built by a well-known Italian yard but was now looking for something bigger for vacationing with his wife and four children. A yacht that also said more about who he was and put flesh on the bones of his dreams. For six long years, he toured the yards both in Italy and beyond, but not a single one could come up with anything that really piqued his passion. Everything felt too poky and closed-in. However, he also refused to give up on his dream yacht.

As time went on, the determined American owner realised that the most strikingly designed boats in the ports and at sea were all Benettis so he decided to go straight to the horse’s mouth. The Benetti team listened closely to what he had to say and then suggested a Design Innovation Project concept which Dutch yacht pen Cor D. Rover had dubbed the Benetti Beach Concept.

It was love at first sight. The businessman initially decided on a 45-metre version but then later went significantly larger with the result that Seasense is a 67-metre.

The most striking feature aboard is the giant 10-metre x 4-metre swimming pool that takes up a quarter of her main deck. It is, in fact, a structural part of the hull itself and can also be used underway. The pool provided the fulcrum for the design, the layouts, and the life of both the main deck and the rest of the boat. “For a couple like the owner and his wife who spend all their working days in air conditioned skyscrapers, having a boat they can live al fresco was an absolute must, regardless of the dimensions,” says Rover. Hence the dining area on the main deck with its 12-seater table is actually indoor-outdoor space with a system of hideaway sliding glass doors which can either connect it to the indoor TV lounge or the beach pool outside. The latter can also be covered by 22 carbon-fibre panels to double as a basketball court.

The indoor-outdoor vibe continues, albeit more subtly, in the saloon on the upper deck and in the incredible gym on the sundeck which opens directly onto the Jacuzzi and sunning area.

Seasense’s equally impressive interiors are the work of Los Angeles-based AREA. Once again, the owner found that nothing on the market really reflected his tastes. He wanted something genuinely different that would be both very  comfortable and classic yet timeless.

Walt Thomas of AREA had already worked with the couple on their homes and knew how much they disliked any repetition of materials or colours. They wanted every space to be absolutely unique.  And that is what they have got in Seasense. The only leitmotif running through the interior design is the white used for the ceilings, panelling and window frames. Otherwise every single cabin, saloon, lounge or bathroom has its own identity. All have exceptionally high ceilings (2.7 metres) with the exception of the master suite where they are an airy three metres to showcase a positively sculptural mirrored and brushed steel chandelier by Studio Roso.

A dizzying array of materials appears aboard from marble in the bathrooms to leathers and silks for the upholstery to steel and wood. Designer names abound too with sofas supplied by Holly Hunt and Chai Ming Studios and rugs by Tai Ping. Adding an extra zing are the works selected from owner’s personal art collection.

The colour palette aboard Seasense is vast but the overall impression is one of utter harmony. She is a yacht that bursts with character but is still wonderfully liveable. Yet another masterful display of the Italian superyacht sector’s ability to step up to mark.