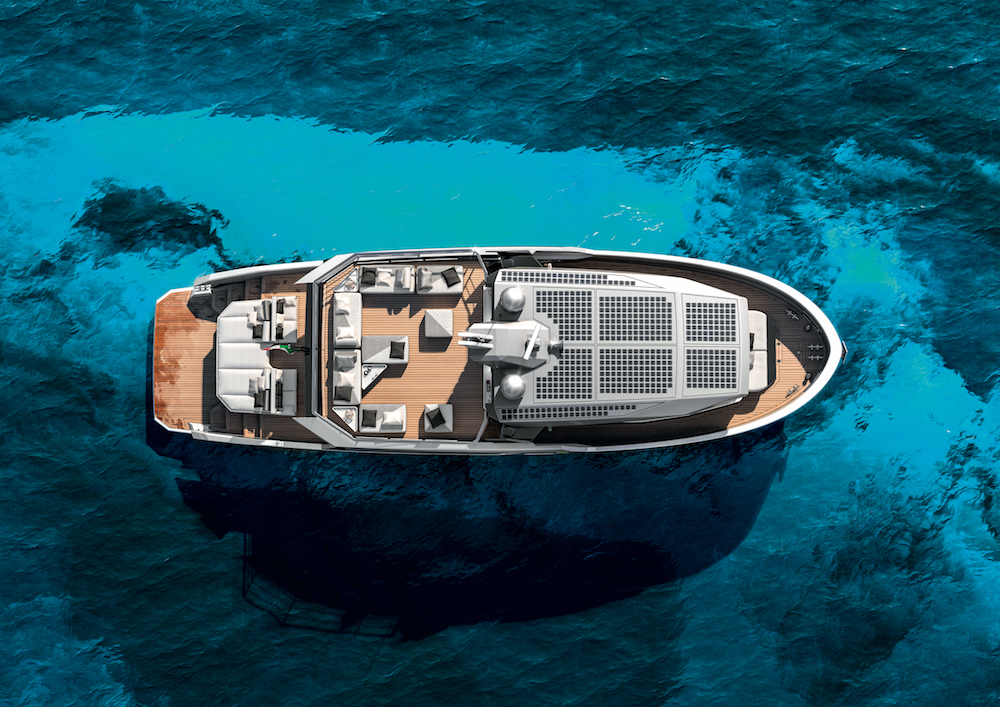 Economist Ernst Friedrich Schumacher said it best in 1973 in the title of his seminal book Small is Beautiful, in which he addressed a range of themes from creativity to ecology. The new “pocket megayacht” Sherpa XL really is both small and beautiful.

Almost perfect, in fact, as she combines efficiency, performance and green technologies in one neat package. The Sherpa XL is a compact yacht with softly rounded exterior lines that will provide a comfortable living space on long, dynamic crossings and voyages. Everything aboard is very much person-sized, contact with nature is superb and sustainable too. Stretching 78 feet or 23.8 metres in length with a maximum beam of 6.9 metres, this new model is a sibling of the multi-award-winning Sherpa launched in 2016, and has been eagerly awaited by the international market. “I want this model to be a further step forward in the creation of a whole new yacht concept, producing a separate line. I don’t want it to be just a bigger Sherpa,” declares Arcadia Yachts’ sole director Ugo Pellegrino.

Thus the semi-displacement Sherpa XL offers 220 square metres of living space between interiors and exteriors, that’s 25% more than other yachts in the same category. It also hits the nail on the head in terms of amenities and range. Milanese studio Hot Lab crafted the interior and exterior design with the aim of retaining the instantly-recognisable Arcadia Yachts’ look. “The Sherpa XL concept develops around a specific deck arrangement. The foredecks are staggered to develop a central block. Aside from opening up lots of space despite quite low heights, it also allowed us to play with the volumes and create an absolutely recognisable profile.”

The upper deck boasts a sun lounge with its own bar area. This is an area completely dedicated to guest leisure unlike the traditional fly bridges which have an exterior steering position. The sky lounge has large up&down windows also. Aft the cockpit is connected to the beach platform by a short flight of steps. Again this creates a visual interplay and, thanks to apertures, in the bulwarks the sea is within sight.

The owner can choose between three or four cabins to suit his or her own requirements and this decision will change the position of the galley. In the three-cabin layout, it will be on the lower deck, while if there are four cabins, it will be situated in the sky lounge on the bridge deck. The owner also gets to choose the Italian-made materials and furnishings which have a clean, pared-back look.

“Simple geometries to maximise the volumes and almost make you forget you are in a 24-metre yacht on the one hand and on the other help make the most of the available space, making life as comfortable as possible for guests during their stay,” explains Enrico Lumini, the Milan studio’s Chief Interior Designer. A case in point is the master stateroom which covers over 22 square metres with no partitions between it and the master bathroom, creating a genuine sense of space, something also achieved in the VIP cabin.  There is also an emphasis on sustainability with the solar panels fitted to most of the superstructure guaranteeing around 2 kW of clean energy.

Energy-efficient devices and LED lights save more energy too. Fuel consumption is low also: the Sherpa XL packs a pair of Volvo Penta IPS 1050s and is estimated to be 30-35% more efficient than other yachts of the same category at her long-range speed of 10-12 knots.  She also boasts a good fuel range: over 1,000 nautical miles at 12 knots, in fact. To quote Schumacher: “Today we are suffering from an almost universal veneration of gigantism. That makes it all the more important to insist on smallness where possible.”