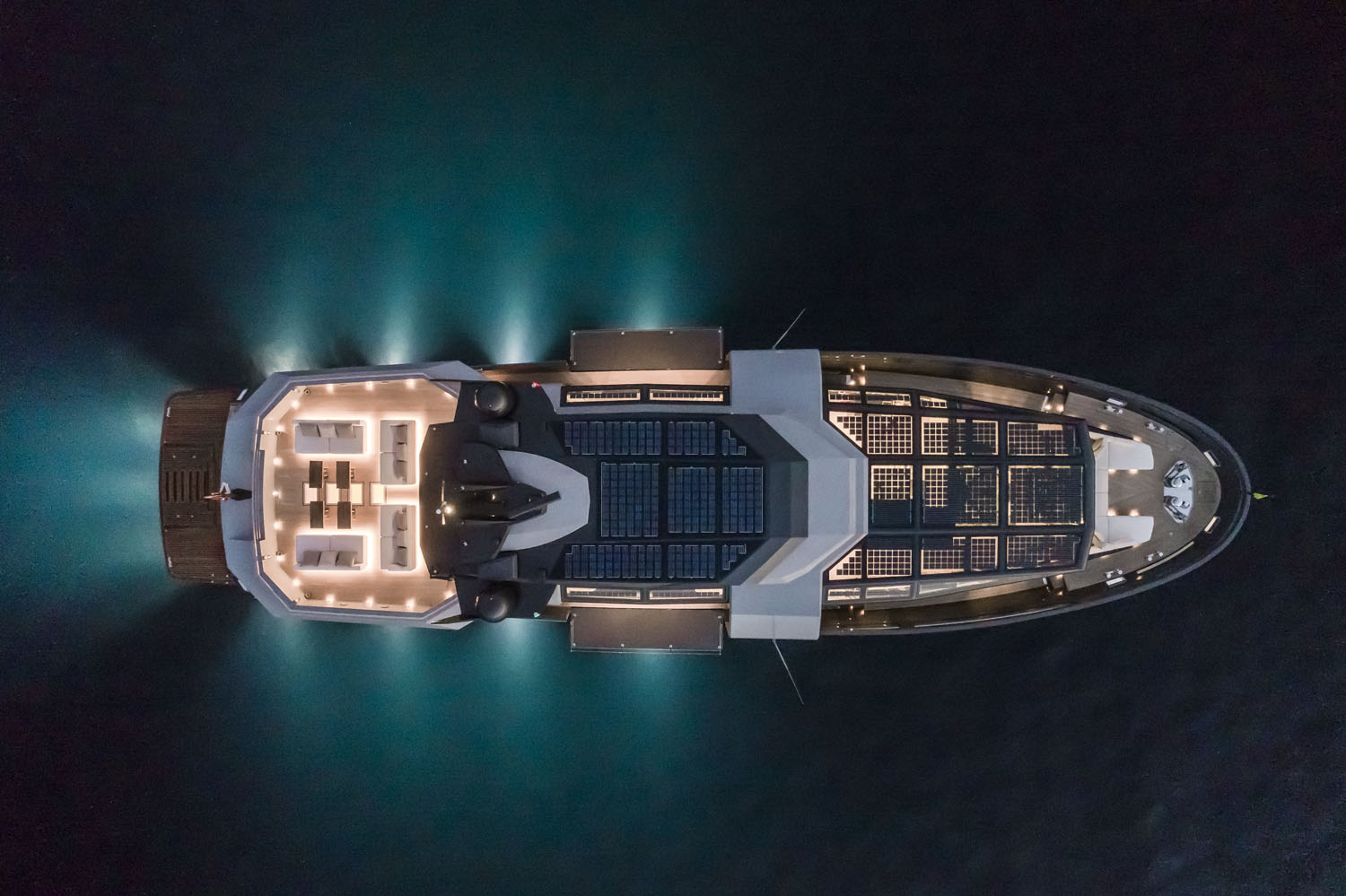 The A105 from Arcadia is the result of the yard’s desire to put the owner at the very centre of its designs and to create spaces that will both cocoon those aboard and allow them live in complete harmony with the surrounding world.

The core value that has always underpinned the Arcadia philosophy is the notion of always starting with the owner and how that individual intends to use the boat before giving form and substance to those needs and desires.

The new A105, in fact, is an evolution of the previous model and the first to splash from the partnership between Arcadia and the Milan-based Hot Lab which began with the concept for the Sherpa XL presented at the last Cannes Boat show

“We didn’t make any radical modifications to the exterior lines compared to the previous model because we didn’t want to denature the design,” explains ex Hot Lab’s Michele Dragoni.

“The most significant change was to the upper deck which we extended. One of the most instantly recognisable features of any Arcadia yacht is the unusual skylights amidships which are made up of prisms that inundate the side areas of the saloon with natural light. They also limited the width-ward development of the forward section of the upper deck, adding a sense of dynamism to the volumes.

The sun lounge aft is full beam to offer the necessary space. The sharp, clear difference in the width of these two volumes has been emphasised rather than trying to soften the connection.

The aft sun lounge is a cheekily octagonal shape to make the most of the available space and references classic Arcadia styling cues. Very few brands could get away with such a boldly non-conformist stylistic language that is still focused on optimising the onboard spaces,” concludes Dragoni.

Thanks to features so unusual they would rarely be encountered on any other boat of a similar size, the A105 has an upper deck complete with enclosed sky lounge and open cockpit which together cover 65 sqm.

The layout too is interesting with a choice of five versions spanning four to six cabins.

That is not bad at all for a 32-metre boat, proving that Arcadia not only intends to but is capable of working for and with its owners by modifying routes, layouts and stairs to make its craft unique.

Genuinely the stuff of what its Marketing & Communications Manager Francesco Ansalone dubs “a boutique yard”.

“To optimise the spaces and increase the volumes available to the guest area, we redesigned the passageway system. Both crew and guest,” explains Enrico Lumini of Hot Lab, which crafted the interiors.

“Paradoxically, we actually added a  stairs aft that serves both the sun deck and the master suite. This eliminated the long crew corridor forward which had ruled out a full-beam VIP.”

Lumini does not say so but the stairs in question really is a bit of design masterpiece. Made from chromed stainless steel with no bannister or side protection, it has been located across the entrance to the saloon. But instead of ruining the aesthetic, it shines as a design feature in its own right, seeming to float on air.

The interiors are where Hot Lab’s touch is clearest. Not just because of the unusual materials, such as Carbalho wood and resin panels, used, but mostly because of the elegance and refinement of the details.  “The lights and the Flexform seats in the interiors excluded, we designed everything else and the yard built it,” continues Lumini. Black and white are alternated in the various finishes and steel is used throughout too, both acting as a leitmotif.

Add to that mix the large windows that are such a signature of all Arcadia yachts and the incredible interplay in the glass surfaces in the solar panels, it’s easy to see how the architectural box of  the superstructure and its contents  meld to create a whole that cocoons  the people living aboard and underscores the Neapolitan yard’s philosophy of putting owners at the centre of everything to ensure their dreams come true.

Proof of the huge success being enjoyed by the model is that the third A105 is due to touch the water any day now while the fourth is at the lamination stage. Tellingly, all were purchased by A85 owners, a sure sign that Arcadia is more than a passion, it’s a philosophy.