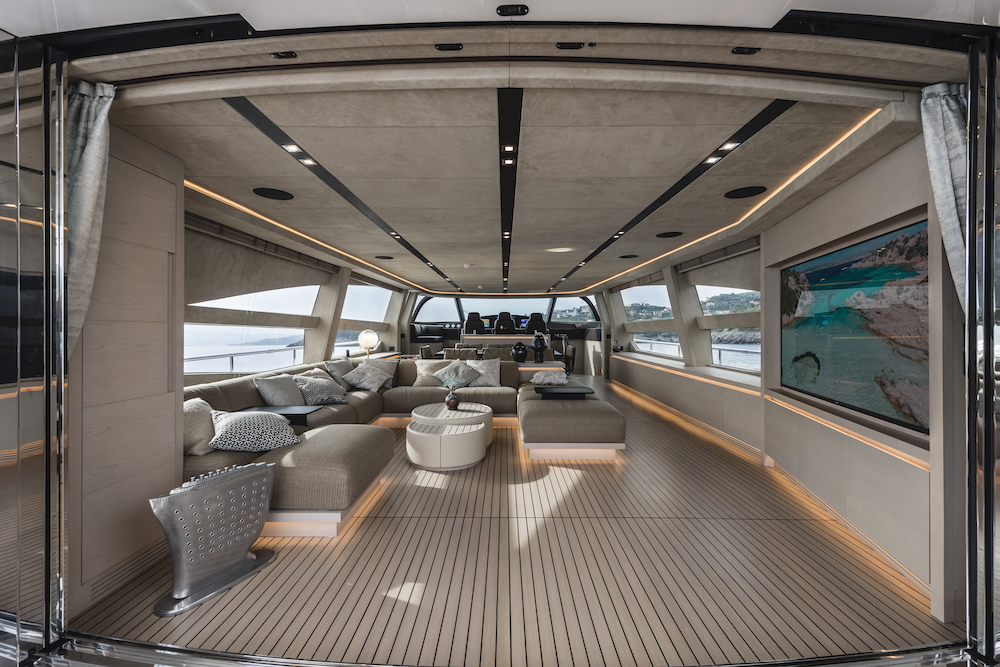 She is the fastest yacht in her category. But that is just for starters. The new AB 100, the second 30-metre to emerge after Spectre, also flanks this impressive performance achievement with a long string of unusual features.

She was built by the Viareggio yard which has been part of the Fipa Group since 2001 and is synonymous with water jet propulsion which it describes “the best choice for boats that want to combine excellent performance with a seafaring lifestyle based around comfort and safety”.

AB Yachts not only focuses on water jets but also adopts a a special assembly technique adapted from the aerospace industry which uses structural glues rather than screws and mechanical connections as when the latter are subject to vibration, they tend to create annoying noises and creaking sounds.

The yard also uses lightweight dividers to create the interior spaces and the yacht itself is built from a strong yet light Kevlar/carbon-fibre and GRP composite. This produces a 30.5-metre yacht that can make 55 knots. The yard has maximised the interior volumes and carved out generous al fresco spaces to boot. First and foremost of these is the foredeck area which has a front-facing sofa, table and  sun pad.

Then there is the fly where guests have a sofa, dinette and sun pad alongside the external steering position. Moving back down the aft cockpit, we find a dining area with a bar and yet another sun pad between the two sets of steps leading down to the beach area.

The saloon is entered through a hideaway glass door in the cockpit and features a lounge area with sofas and then the dining area which seats 10 and is just before the bridge.

The décor in this second AB 100 is a joint effort between the AB Yachts style centre and the Giovanni Pagani architecture studio. It is a subtle mix of muted beiges which are underscored by pale wood inserts along the base of the furnishings and the sides of the rooms. The bridge is trimmed in coffee-coloured leather.

The saloon is wonderfully bright, thanks to plentiful light from the sliding door and the large wraparound windshield/window that surrounds the entire superstructure. Combined with the side profile, the latter is what gives all AB Yachts craft their distinctive layout.

To starboard of the bridge is the stairs leading below decks and to the corridor with the galley on one side and the sleeping quarters on the other. Even in the galley, beige dominates, contrasting gently with the dark brown worktops which subtly reference the colour of the bridge.

Equipped to a professional standard, the galley also includes a dining table for the crew and access to the service areas which can also be reached from the main deck.  The various shades of beige used in the saloon also reappear in the sleeping quarters which have been further extended.  Aside from the master suite, there is a double cabin and two twins, in fact.

Located amidships, the full-beam master suite has two side windows, creating a bright and fresh ambience. A large two metre by two metre bed dominates but there is also a dressing table and a sofa. A walk-in closet and bathroom, also with a beige colour scheme, is aft of the bedroom.

The same colours and finishes, including the wooden floors in the bathrooms, are also used in the double cabin which is at the foot of the stairs from the main deck, and the twins on either side of the corridor leading to the master.

All of the latter exude the same sophisticated elegance as the main deck spaces and their colour palette creates a wonderfully soothing, relaxing ambience. The focus on colour aboard the new AB 100 even extends to the yacht’s exterior livery. In fact, the owner requested a specific white inspired by the camellia flowers growing in his garden. A bright, warm colour that is as unique as the new AB 100 itself.